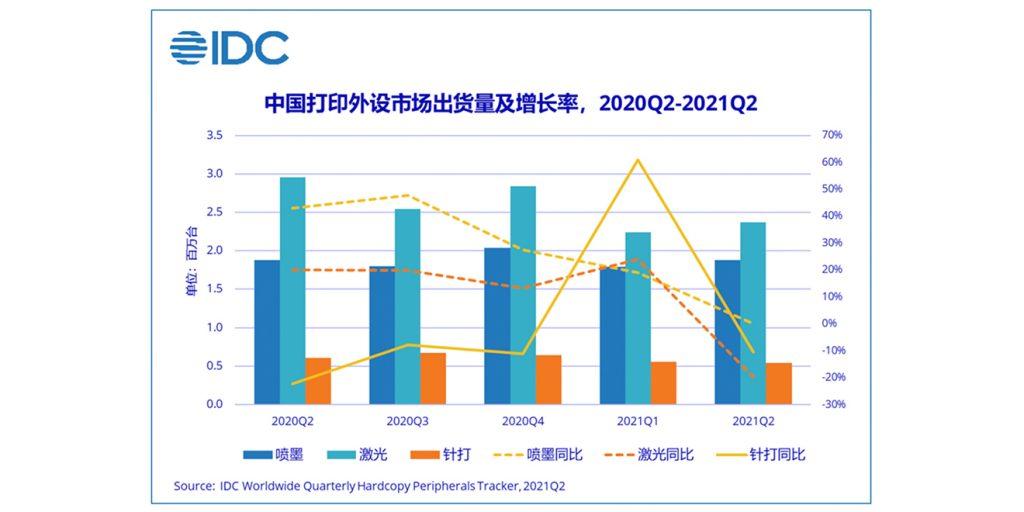 In the second quarter, the supply shortage of printing peripherals intensified, and demand decreased simultaneously, according to the latest research update by IDC.

IDC said that there are several reasons for the market decline in the second quarter. First, the shortage of supply has intensified, and various types of printing equipment have different degrees of shortages, of which the shortage of laser printing equipment is the most serious. The epidemic in Southeast Asian countries escalated again in the second quarter, and some manufacturers’ production in local factories was severely affected, resulting in a serious shortage of domestic product supply in China.

Secondly, rising raw material prices and rising shipping costs brought increased pressure on business operating costs, and printing equipment manufacturers have increased their adjustments. Product prices have restrained the purchasing needs of some users to a certain extent; in addition, recent policy adjustments and other reasons have caused a decline in the purchasing needs of families and education and training industries.

At present, inkjet printing equipment still occupies a dominant position in the household consumer market. On 21 May, the General Office of the Central Committee of the Communist Party of China and the General Office of the State Council issued the “Opinions on Further Reducing the Burden of Compulsory Education Students’ Homework and Off-campus Training” (referred to as “Double Reduction”). The issuance of the “double reduction” series of policies has to a large extent brought about a decline in home printing volume, which has led to a decline in the demand for purchases in the consumer market.

IDC added that in the second quarter, the shortage of A4 format printers was the most prominent. The epidemic situation in Southeast Asian countries is severe. Vietnam, Thailand and other places have implemented strict epidemic prevention and control measures, causing some manufacturers’ factories to shut down. At the same time, China’s import and export inspections have become stricter, resulting in a shortage of supply of complete machines and delays in delivery.

In addition, there is still a shortage of chips and parts. In the first quarter, international manufacturers were significantly affected by the shortage of chips, and domestic manufacturers also began to be affected in the second quarter. IDC data shows that A4 laser printers have fallen by 22.1% year-on-year, which is also lower than the same period in 2018 and 2019. In the face of repeated epidemics at home and abroad, the overall supply situation is still facing greater uncertainty.

The supply and demand of A3 format laser composite machine is stable, with a year-on-year increase of 7.9%

Ren Mengxue, a Senior Analyst at IDC China’s Printing, Imaging and Document Solutions Research Department, believes that printing equipment will still face many problems in the second half of 2021: “There are uncertainties in export trade; domestically, affected by the rising prices of upstream commodities, rising raw material prices and rising labour costs have led to production and operation difficulties in some mid- and downstream industries and small and micro enterprises; consumer market demand is also relatively weak.

“In the second half of the year, in the face of the decline in market demand, manufacturers should strengthen channel guidance and price control; at the same time, the majority of printing equipment channels should also realize that unstable supply will be the norm in 2021, and rational response and careful formulation of sales targets are required.”