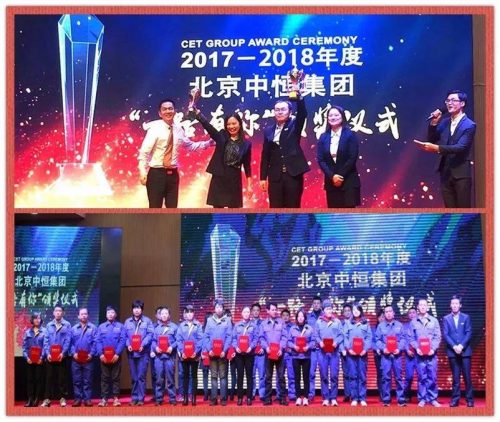 The Chinese supplier has been marking its successes and strengthening its team spirit at the company’s annual conference, held on 8 February 2018 in Beijing.

The event, which took place at the Longhe Hotel, was divided into three sections, entitled “Descendants of the Dragon”; “Using Excellent Views and Ideas from all Over the World”; and “A Heart Full of Gratitude”.

At the start of the meeting, President Ma expressed his appreciation to all strategic partners and delivered a “touching” opening speech. With that, the meeting (thematically titled “Always with You”) officially began.

The first chapter of the meeting, “Descendants of the Dragon,” was focused on the origins of the company and featured an array of songs and dances that “recognised China’s unique and charming culture”, according to CET Group.

The second chapter, entitled “Using Excellent Views and Ideas from All Over the World” “recognised CET Group as an internationally-successful enterprise full of versatile workers” and featured a piano solo and the musical stylings of a beatboxer.

The third and final chapter was called “A Heart Full of Gratitude” and “illustrated the friendship, understanding, and cooperative ability between colleagues in CET Group.”

CET Group states that the company “has always treasured talented people”, and during the conference, “recognised a few hundred of our own gifted employees with ten separate awards for Potential, Performance, and Positive Energy, among other good qualities.”

The company went on to say, “We also recognised various employees that have worked diligently for CET Group for 10 years.”

Concluding the event, President Ma and General Manager Demi Dai, along with the senior management team, made a toast and once again expressed gratitude for their staff.

The conference gave CET Group an opportunity to mark its recent successes in 2017, which included “achievements in development and innovation”, according to the supplier, as well as the opening of four new overseas branches.