Calidad prepares for Paperworld ME 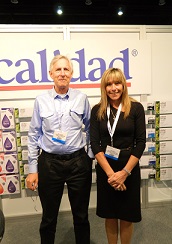 This year’s hosting of Paperworld Middle East takes place at the Dubai International Convention & Exhibition Centre from 18-20 March, and a wide range of exhibitors from across the office imaging and aftermarket industry are lined up to attend.

Among these confirmed exhibitors for the three-day show is Australian company Calidad, which is continuing its impressive attendance record, having exhibited at every edition of the Paperworld Middle East show since its inception.

Calidad was founded in 1975 by Managing Director Robin Kenyon, and, having originally focussed just on printer and typewriter ribbons, has now expanded its offer to include “a broad portfolio of printing related consumables,” such as ink cartridges, toner cartridges, and refill kits.

The company’s products are available from over 2,000 dealers across Australia, as well as throughout 20 further countries across Europe, the Middle East, Africa and the Americas.

“For each of our product categories, we study how each product functions, and then our designers and engineers set their sights on how we can create the highest performance under a precision manufacturing process,” the company explained, adding it prides itself on “vivid, vibrant and rich colour reproduction for photo printing, deep sharp black tones for text printing.”

In 2017, the company was forced to defend itself from claims by Epson of patent infringement regarding Calidad’s important and sale of remanufactured cartridges. The Australian company was successful in its defence, with the majority of the OEM’s claims rejected by the Federal Court of Australia.

This year’s Paperworld Middle East runs from March 18-20, and will once again see thousands of visitors from across the Middle East and North Africa, as well as further afield, descend on the Dubia International Convention & Exhibition Centre for three days of trade, business and networking opportunities.

As well as the latest in office supplies, printing materials, stationery, paper and gifts, the 2019 show will also feature Playworld Village, the region’s leading platform for children’s toys and games, and Leatherworld Middle East.

It’s still not too late to secure your tickets for this not-to-be-missed event; to do so, click here.