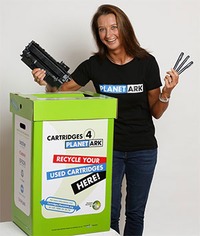 Cartridges 4 Planet Ark was first introduced in 2003 and over 15 years later, two thirds of Australians (66 percent) have heard of the programme – the second highest awareness rating of all the nationwide recycling programmes, behind only Kerbside Recycling (79 percent).

According to C4PA, “this awareness also translates into action, with almost half of people surveyed having recycled an ink cartridge.” Of the 66 percent of Australians aware of the programme, 64 percent trust it to properly recycle their cartridges, the highest of all recycling programmes. Conversely, only 3 percent have “no trust” that collected cartridges are recycled, which the company says is “indicative of having an independent audit of the programme each year.”

Pollinate’s survey also reveals why trust in C4PA is so high, with the top reason being that “Planet Ark is a well-known, trusted and reputable organisation, and people believe and expect we will do what we say,” according to the company.

The research highlighted that a higher proportion of older and regional Australians are aware of the programme, compared to other demographics, which C4PA said will be helpful in knowing “how we can focus our education around other audiences, to keep Cartridges 4 Planet Ark diverting more and more from landfill well into the future.”

Australia’s leading Consumer Trends Report focusing on sustainability and health (LOHAS 6) also found that Planet Ark is the brand “most reputed” to operate in a “responsible, sustainable, environmentally friendly or ethical manner.”

“We’d like to thank all Australians who have signed up for a Cartridges 4 Planet Ark box and put their trust in us,” the company declared. “With Zero Waste to Landfill certification, nothing goes to waste when processed for recycling by our partner, Close The Loop. We’re also thankful for the support of the workplace programme by our participating manufacturers, Brother, Canon, Epson, Konica Minolta and Kyocera, who pay for the recycling of their cartridges and are truly taking responsibility for the end of life of their product.”