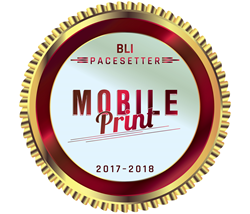 Xerox Corporation have been awarded the BLI PaceSetter Award in the Mobile Print category by Keypoint Intelligence-Buyers Lab (BLI), the award given to the OEM that offers the best range of mobile printing devices and solutions for its customers.

Xerox were crowned for it work in recognising “the challenges of businesses trying to enable mobility” and for the solutions it offers in overcoming them. BLI also praised the company’s response to security concerns, and its “strong support for industry standards like Apple AirPrint, Google Cloud Print, Wi-Fi Direct printing, and others.”

The research undertaken by the adjudicating analysts was carried out across Western Europe in mid-2017. BLI Director of Software Analysis Jamie Bsales described Xerox as providing “the most complete mobile print offering.”