Xerox ranked one of USA’s Most JUST 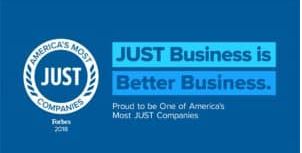 As the OEM has announced this week on its blog, Xerox has been honoured by Forbes and JUST Capital as one of America’s Most JUST companies in 2018.

The blog explains, “Xerox outperformed peers on issues like customer treatment and privacy, beneficial products, environmental impact, community support in the U.S. and abroad, as well as ethical leadership and long-term financial growth.

According to the ranking, companies in the JUST 100, compared to their peers in the Russell 1000, on average:

The OEM says it is proud to be acknowledged for its social innovation and contributions to customers, the community and the environment.

As a result of being named to the JUST 100, Xerox is included in Goldman Sachs Asset Management’s JUST U.S. Large Cap Equity ETF – the first ever exchange-traded fund based on just business behaviour, constructed from JUST Capital’s rankings.