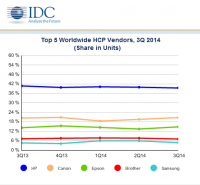 The report from IDC’s Worldwide Quarterly Hardcopy Peripherals Tracker, outlined that the market’s value grew to $14.9 billion (€12.1 billion) in the third quarter of 2014, but shipments themselves declined by 2.3 percent to a total of 27.5 million. IDC reported that Western Europe enjoyed a sixth consecutive quarter of growth, with the “main driver” colour MFPs, while inkjet “continued to show year-on-year increases” despite a lower demand in consumer markets, with business inkjet’s “growth patterns […] again strong”.

Finally, in terms of OEMs, Epson and Samsung – two of the top five worldwide – saw “positive year-over-over growth”, with most of Epson’s coming from “developing regions”, while Samsung grew its gains in “developed regions” including the USA and Western Europe. Ricoh meanwhile “continued to gain momentum in the laser space”, with continuous year-over-year growth in shipments since the first quarter of 2010.

Phuong Hang, Programme Director for IDC’s Worldwide Hardcopy Peripheral Trackers, commented: “IDC expects solutions, services, and workflows will be the main growth areas for the printing industry going forward. Nevertheless, there is still ample opportunity to make equipment sales within the traditional printing market as well as in adjacent markets.”