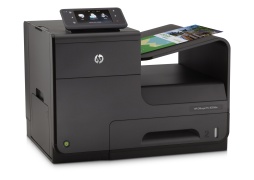 Business website Startups reports that HP has now launched the world’s fastest desktop colour printer, the Officejet Pro X series, which is able to print professional-standard documents at “up to 70 pages per minute” and has been recognised by the Guinness World Records as a record breaking device for its speed.

Designed to provide commercial printing standards at an affordable price and faster speeds for small and medium-sized businesses, HP claims that both the single-function and multifunction colour printers announced “offer half the printing cost of laser printers and double the speed” using the OEM’s PageWide Technology which is able to “scale down commercial printing technologies”.

The printhead in the device remains fixed as it “rapidly pumps out the ink” while “more than 40,000 tiny nozzles spanning the full width of the paper propel four pigment colours onto it”, meaning that there are around 1,200 nozzles per inch resolution. The printhead’s lack of movement also means a reduction in noise levels and increased precision, and HP claims that the printer uses up to 50 percent less energy than its laser counterpart.

The cost of the printers starts at £319 ($496/€368) for the single-function models. The Recycler previously announced the product reveal of the Pro X and its MFP sibling last year, with discussions at Remanexpo@Paperworld Europe 2013 discussing the potential for the device.