What the future holds: Brexit and the pound 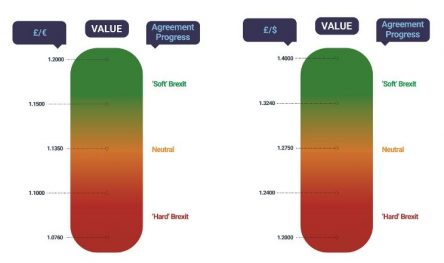 With the 29th of March 2019 rapidly approaching – the date when the UK is scheduled to leave the EU – the possibility of ‘no deal’ could result in renewed “volatility” for the pound.

As a new blog by Xe explains, the UK parliamentary vote on Theresa May’s withdrawal agreement is to take place on 15th January, but although it has been signed off by leaders of 27 EU countries, “there is speculation that it will not get the backing” of Parliament.

If this happens, it could have significant implications for the UK and the pound, which was already “negatively affected” in 2018 due to “ongoing concerns of a disorderly Brexit”.

The blog advises businesses to prepare themselves “for all possible outcomes.”

While it isn’t possible to predict what might happen, if a deal is reached or not, it “seems reasonable to assume that there will be volatility for the pound whilst the deal is being negotiated.”

Xe has created its own Brexit Barometer to demonstrate the possibilities.