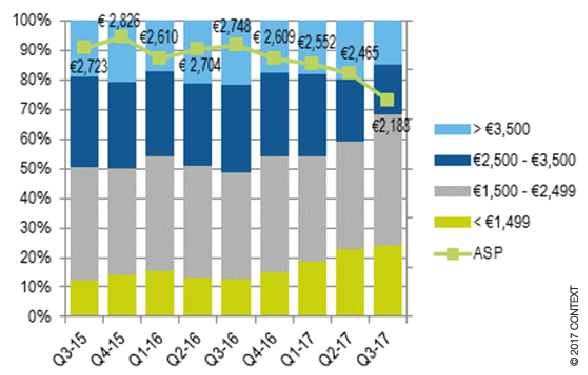 Context has published data showing a 9 percent decline in unit sales of inkjet MFPs in the third quarter of 2017, compared to the same period in the year before. This in turn has led to a similar decline of overall printer hardware sales across Western Europe.

Unit sales of single-function laser printers were particularly low, falling 15 percent year-on-year, a drop which Context attributes to the ongoing trend towards MFPs and away from SFPs.

Laser MFPs were in fact the only category in which distributor sales increased, climbing 2 percent in the third quarter. This rise is largely propelled by increasing sales of colour laser MFPs, with sales of A4 models increased by six percent. According to Context, “almost half of all A4 laser printers sold in Western Europe are now MFPs.”

At the same time, the data released shows the average selling price (ASP) falling across the region, for both mono and colour devices. The ASP of A4 mono laser MFPs now stands at €176 ($205), a decrease of 2 percent, while that of the colour equivalent fell 3 percent to €296 ($345).

Sales of A3 colour laser MFPs increased in Western Europe, despite a decline in previous quarters, whilst the ASP continues to drop; it currently stands at €2,188 ($2,548), a 20 percent fall year-on-year.