Waste back to Australia 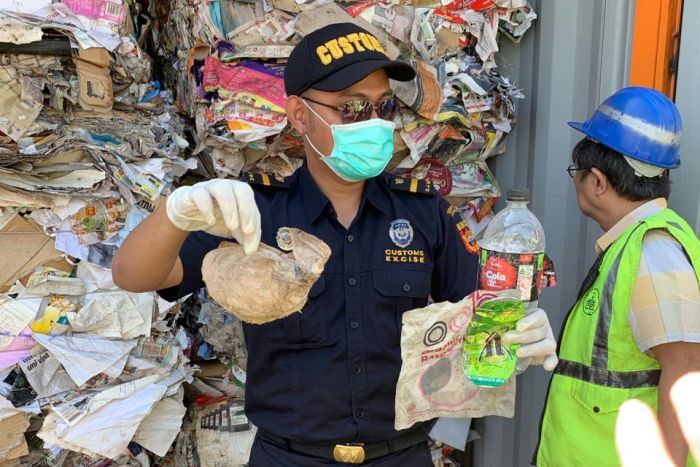 An Indonesian customs official displays some of the waste, including a dirty nappy, which was among the paper (ABC News: David Lipson )

Containers full of waste destined for recycling which were sent to Indonesia from an Australian waste company have been deemed too contaminated for recycling and will be returned to Australia.

Eight containers, holding about 210 tonnes of waste, declared as household waste, were sent to Australia for recycling by Australian firm Oceanic Multitrading but after inspection, Indonesian customs officials said the waste was too contaminated to be recycled.

The Recycling Forum reports that “e-waste, plastic bottles, shoes and used cans” were found “amongst the loads which were labelled as wastepaper.” The containers “tonnes have been deemed as “B3”- meaning they contain toxic and hazardous materials and potentially pose a threat to the environment and human health.”

The Recycling Forum writes that on Tuesday press was allowed to inspect the containers and customs officials held up various samples of the contaminated items found in the containers.

Received in the middle of June, the containers were shipped by Australian firm Oceanic Multitrading who had Indonesian import firm PT MDI help to receive it in the country and were shipped via Brisbane to Surabaya.

Indonesian custom officials feel strongly that they “are obliged to protect Indonesia and its environment from imports of B3 waste” and are looking to re-export the containers immediately.

China introduced new restrictions on imports in 2018, which had a knock-on effect around the world as countries struggled to process the volumes of waste they were left with. As a result of China’s ban on importing waste there was a notable increase of waste exports to neighbouring Nations like Vietnam, Malaysia and Thailand.

Enough is enough? The Recycling Forum reports that Malaysia has also returned 100 tonnes of contaminated waste back to Australia as well as the Philippines sending 69 containers back to Canada in June. A further 49 containers are set to be shipped back to the US, France and other EU countries by Indonesia.

Speaking to abc.net Mr Basuki Suryanto, the head of customs at Tanjung Perak Port said: “Countries who are concerned about the environment should set a good example to developing countries like Indonesia.”

Officials said to the press that Indonesia will not hesitate to send back every container of illegally imported waste found in the ports.