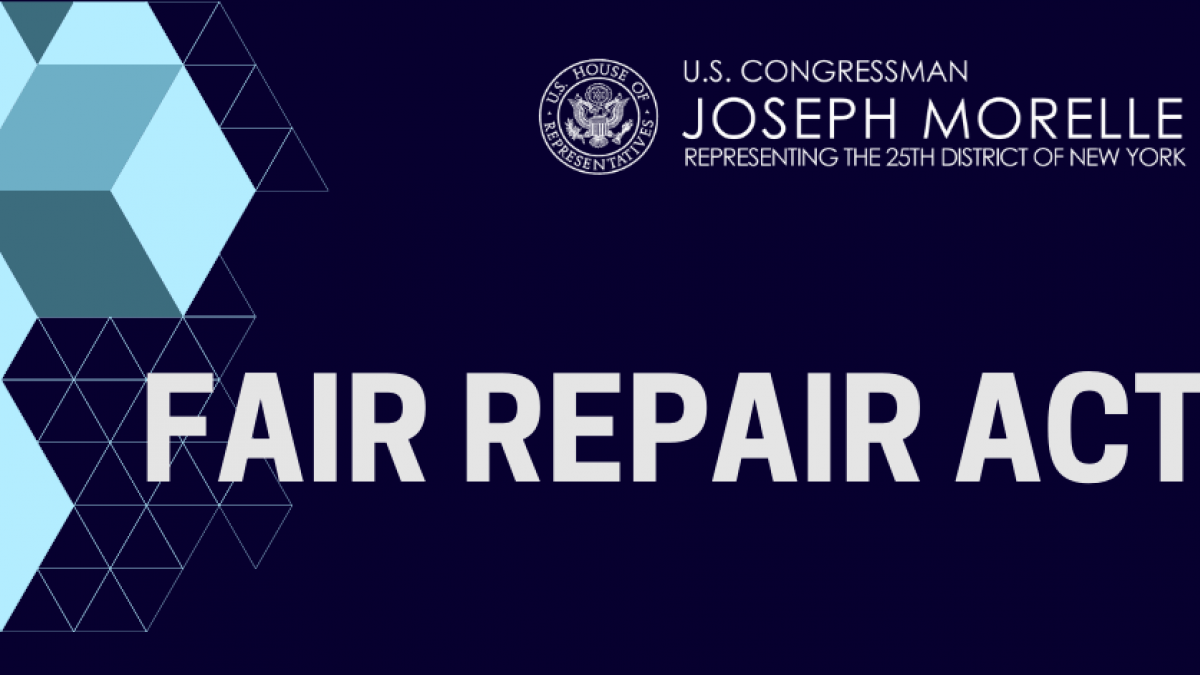 This legislation would finally give small businesses and consumers the “Right to Repair” their own products like cell phones and computers.

“For too long, large corporations have hindered the progress of small business owners and everyday Americans by preventing them from the right to repair their own equipment,” said Congressman Joe Morelle. “It’s long past time to level the playing field, which is why I’m so proud to introduce the Fair Repair Act and put the power back in the hands of consumers. This common-sense legislation will help make technology repairs more accessible and affordable for items from cell phones to laptops to farm equipment, finally giving individuals the autonomy they deserve.”

Currently, many electronics manufacturers require that repairs, or parts to complete a repair, be made by the original equipment manufacturer (OEM) itself or through one of their authorised vendors, making the process costly and burdensome for consumers.

Maureen Mahoney, Senior Policy Analyst, Consumer Reports, said: “If you own it, you should be able to fix it. We’re pleased that Congressman Morelle is taking the lead on legislation to ensure that consumers can fix their own electronic products, or have them repaired by the servicer of their choice. We support this important bill which will guarantee consumers the right to repair, which will help increase competition, reduce waste, and lower prices for repair.”

The Fair Repair Act will require OEMs to make diagnostic and repair information, parts, and tools available to third-party repairers and owners in a timely manner and on fair and reasonable terms, helping consumers and repair shops to avoid unnecessary and costly delays while also reducing waste. This bill allows for the Federal Trade Commission (FTC) to penalise those who violate these provisions through civil penalties including payment of damages, reformation of contracts, and refund of money or property. It also empowers the FTC to promulgate any rules or regulations necessary to carry out these enforcement duties. The Fair Repair Act authorises state attorneys general to enforce the bill’s provisions as well.

Kit Walsh, Senior Staff Attorney and Assistant Director, Electronic Frontier Foundation, said: “This important bill will help Americans keep our technology in good repair and will help small repair businesses compete on fair terms with device manufacturers. Ultimately that means higher-quality device repair for lower prices, less environmental waste, and a safer Internet of Things. The bill is also significant because it recognizes that device owners have rights, that you are allowed to understand and fix your devices even if the manufacturer would rather they were the only one.”

Kerry Sheehan, U.S. Policy Lead at iFixit, said: “Big tech companies shouldn’t be able to dictate how we use the things we own or keep us from fixing our stuff. We applaud Representative Joe Morelle for taking the fight for Right to Repair to Congress and for standing up for consumers, farmers, and independent repair shops nationwide.”

“Consumers should not have to throw away broken devices or overspend on pricey ‘official’ repair channels,” said John Bergmayer, Legal Director at Public Knowledge. “The Fair Repair Act recognizes that consumers have a right to repair the devices they own, and that practical and legal obstacles should not stand in the way. Ensuring that people can repair devices and use independent repair shops doesn’t just save them money; it has significant environmental benefits as well, reducing e-waste and carbon use. We commend Rep. Morelle for leading on this issue.”

Gay Gordon-Byrne, Executive Director of Repair.org, said: “Every year I’ve worked on Right to Repair, it’s gotten bigger, as more and more people want to see independent repair protected. From just a few states, to 27 states so far this year. We’ve seen progress in the E.U. and Australia, and now Congress is taking it up. Rep. Joe Morelle has been a champion for much of that journey, sponsoring legislation while in the Statehouse in Albany starting in 2015. Everywhere you go, people just want to be able to choose for themselves how to fix their stuff. You’d think manufacturers would wise up.”

Nathan Proctor, U.S. PIRG Senior Campaign Director, Right to Repair, said: “Right to Repair just makes sense. It saves money and it keeps electronics in use and off the scrap heap. It helps farmers keep equipment in the field and out of the dealership. No matter how many lobbyists Apple, Microsoft or John Deere and the rest of the manufacturers throw at us, Right to Repair keeps pushing ahead, thanks to champions like Rep. Joe Morelle.”