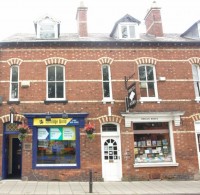 The Cartridge World store in Altrincham

The Altrincham franchise in the UK will remain in its current base as other floors in the building are redeveloped.

Messenger Newspapers reported on the property, on Regent Road in the town, which was sold by a private investor to LMO Property Ltd., and which includes a “basement, ground and two upper floors”, with Cartridge World based in the basement and ground floor. The news outlet commented that the site “has been sold and is being given a makeover” on the vacant first and second floors “to create four office suites”.

Cartridge World retains the ground floor and basement, and “has signed a new three year lease”, while the new owners of the site have already “generated two new lettings” for the upper floors, including a property company and a web design and online marketing business. Another UK franchise is relocating in York, with the Acomb site “not to close down, but simply relocating in new premises located in the same street”.