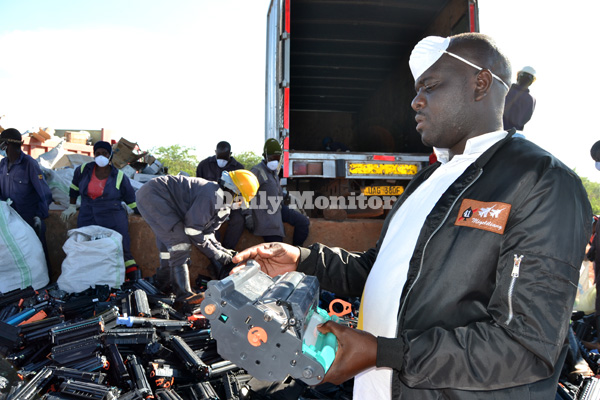 Mr Samuel Ojobira an enforcement police officer attached to URBS displays some of the counterfeit cartridges at the Nakasongola off-site grounds in Nakasongola District on Thursday were the products were destroyed. PHOTO BY DAN WANDERA

The Uganda Registration Services Bureau together with the Trans-World Protection Group has disposed the last bit of the total seized Shs25bn ($240 million/ €219 million) worth of counterfeit toner and inkjet cartridges.

The Daily Monitor reported that on 3 September twelve tonnes of counterfeit HP and Canon toner and inkjet cartridges were destroyed at the “UPDF managed off-site disposal ground in Nakasongola District”.

Mr Alex Tumuhairwe, the URSB Head of Operations and Enforcement told the Daily Monitor: “You rarely find the counterfeit HP and Canon toner products on open display with the famous Nasser and Nkrumah road dealers in Kampala City after the major operations where we seized 60 tons worth Shs25bn of the counterfeit products. We have successfully completed the last cycle of the seized computer accessories but the operations will not stop. Several of the suspects were arrested and successfully prosecuted including three dealers who were convicted.”

In July The Recycler reported that five tonnes had been destroyed of these seized products and on Friday 13 September the Anti-Counterfeit Agency destroyed apprehended goods worth Sh5 million ($48,161/ €43,730) in Mombasa.