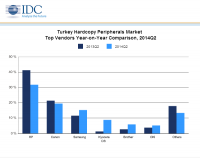 The market was affected by the run-up to recent presidential elections.

IDC reported on the Turkish hardcopy peripherals (HCP) market’s issues during the second quarter, with presidential elections held earlier this month “pil[ing] pressure onto” the sector, which saw a 14.8 percent decline in shipments year-over-year due to firms “postpon[ing] their purchases in the lead-up” to the elections.

The market totalled 224,000 units in the quarter, with the value of these units increasing by three percent year-over-year to $94.9 million (€73.6 million). Turkey’s consumer market “remains the biggest single vertical” in the country in terms of IT spending levels, but it suffered a “significant contraction” in purchases in the quarter, thanks to “weaker economic growth, high inflation, [and] continuing currency weakness” having a negative impact on “consumer confidence and private consumption”.

Monochrome laser shipments declined as well, by 8.7 percent, for a total of 128,000 units shipped. IDC noted however that “in value terms” the market actually grew by 11.4 percent to a valuation of $65 million (€50 million), thanks to “strong performance” in the 21 to 30ppm speed segment. This was said to be as a result of “demand stemming from the government’s FATIH project”, which seeks to integrate state-of-the-art IT into Turkey’s education system.

Colour laser meanwhile was the only segment to register year-over-year growth in the quarter, with shipments growing by 6.1 percent to a total of 14,000 units, but the market’s value fell by 34.1 percent to a value of $17 million (€13 million), largely down to “increasing competition continu[ing] to drive prices down”, especially in the one to 10ppm entry-level sector.

Zeynep Kilic, Programme Manager for Imaging, Printing and Document Solutions at IDC Turkey, stated: “The colour laser category continues to post the country’s most impressive volume growth rates, but we are also seeing strong shipment growth in the midrange mono laser segment thanks to ongoing government projects for both A3 and A4 devices.

“Despite the volatile political and economical climate seen in the country, the ongoing reliance on hardcopy documents by businesses is continuing to drive considerable demand for HCP devices.”