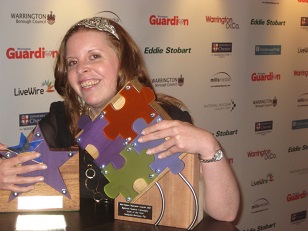 Totalpost’s Kate Simpson with the awards.

Totalpost has announced that it won two awards at the Warrington Business Awards – the Customer Excellence Award and the Team of the Year award – as the company continues to expand.

The Customer Excellence Award was given to Totalpost in recognition of its commitment to “quality products and good customer service”; with particular attention given to the company’s decision to take manufacturing in-house to improve quality control and better manage delivery times.

Meanwhile, the Team of the Year award was given in acknowledgment of Totalpost’s export team, who the company says have worked together to develop a clear exporting strategy, leading to greater international success with over 40 percent of its franking machine cartridges being sold overseas.

Commenting on the awards, Kate Simpson, Communications Manager at Totalpost, said: “We are delighted to have been recognised at this prestigious business event. The whole of the Totalpost team is working really hard to accelerate growth, especially internationally, so it is really good to receive this external recognition for our efforts.”

Totalpost has already seen success this year, receiving the Queens Award for Enterprise in International Trade in recognition of its growth in exports over the past three years; with the company reporting a 20 percent upsurge in business since it received the award in April.

In addition, earlier this year Totalpost opened two companies in France and Germany, and is currently in the process of opening a further company in South Africa.