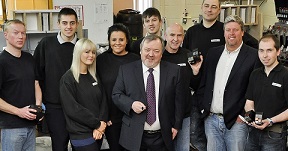 Franking machine cartridge manufacturer announces growth across all areas of business after receiving Queens Award for Enterprise in International Trade earlier this year.

Totalpost has reported that since it was notified of the award at the end of April, the company has seen a 20 percent upsurge in business along with a 25 percent increase in staff numbers as it has received more customer enquiries and taken on a number of new distributors.

The award was given to Totalpost in recognition of the international growth of its mailroom consumables aspect of the business, which manufactures and distributes franking machine cartridges. It has enabled Totalpost to make further investment into their manufacturing centre, with new machinery being purchased and new production staff hired.

Furthermore, subsidiary Totalpost companies have recently been opened in both France and Germany to deal with increased demand for franking machine equipment and supplies in these areas, with another new subsidiary currently being opened in South Africa as the company takes over the official distributorship for the Astrophysics Inc X-ray security screening equipment range in the country. Totalpost added that it has recently become Astrophysics’ leading European distributor, securing over £1 million ($1.5 million/€1.17 million) of orders so far this year, with the company holding exclusive distributor rights for the products in the UK and Ireland over the past 18 months.

A further repercussion of the Queens Award has been an increase in demand for its mailroom and security screening services, which in turn has led to the employment of new engineering staff across the UK.

Commenting on the company’s recent achievements, David Hymers, Managing Director of Totalpost, said: “We have never been busier and this is fantastic. The team is pulling together to ensure that we do not miss out on any opportunities that have been generated as a result of the Queens Award recognition. The rapid growth both at home and internationally is very exciting and all areas of the business are benefiting from it.”