Toshiba outlines vision for the future 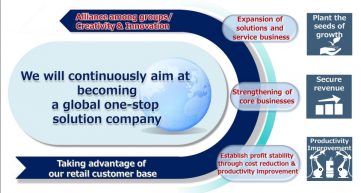 The OEM has been unveiling its mid to long-term plans for the future, in addition to enumerating recent achievements and revealing how it plans to improve.

Looking to the future, the company says its plans include aiming to become a “global one-stop solution company”, expanding its solutions and service business, strengthening its core businesses, and establishing profit stability through cost reduction and productivity improvement.

Among its achievements in 2017, Toshiba cited its participation in national projects initiated by METI, as well as its “No1” shares in both POS unit sales in Japan and Chinese A3 MFP unit sales. It also revealed that in 2017 the OEM had exceeded its sales and O/I forecast by a “big margin” due to a “record high performance” by its domestic retail business and a “steady contribution” from its other core businesses.

The twin pillars of its Mid Term Business Plan (MTBP) for 2018 consist of value creation and productivity improvement, with the OEM aiming to accelerate its investments in R&D, equipment and the channel.

In particularly Toshiba will be focusing on accelerating its solutions business into vertical markets as well as into core business domains such as retailers and offices.

The company wants to demonstrate its adaptation to environmental changes, as well as providing new shopping experiences, implementing a work style reform (increasing operational efficiency) and focusing on the business development of its customers.

In terms of printing solutions, Toshiba says it wishes to expand its growth in both the existing office market and the vertical market (Logistics, Manufacturing, Retail) and focus on the “total management of office equipment by Managed IT Service evolving from Managed Print Service of MFPs and printers”.

The company also says it wants to help customers with both labour saving and operational efficiency by extending its solution line-up across LMR markets.