Toshiba hybrid copier gets the gold 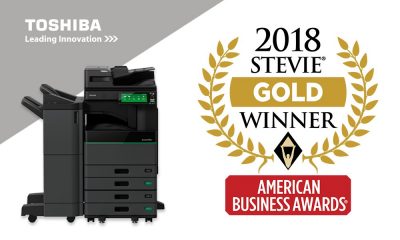 Toshiba America Business Solutions has announced that it has won the 2018 Gold Stevie Award within the business-to-business product category during the 16th Annual American Business Awards.

Via Toshiba’s proprietary erasable toner, the company’s hybrid copiers enable paper reuse by erasing all printed content on the page. In addition to optimising sustainability initiatives, Toshiba explains that the e-STUDIO5008LP series – which includes the e-STUDIO4508LP and e-STUDIO3508LP – allow organisations to function more affordably and efficiently while minimising paper use.

“In today’s competitive and environmentally-conscious landscape, Toshiba demonstrates strength in innovation with the launch of its e-STUDIO4508LP, the industry’s first hybrid MFP that prints in both black and white and erasable blue,” said Valerie Alde-Hayman, industry analyst at gap intelligence. “This new technology evolves Toshiba’s hybrid MFP line and will enable a wider range of customers to reduce their environmental impact while also maintaining access to standard monochrome printing.”

The e-STUDIO4508LP has already won a Better Buys 2017 Editor’s Choice award as well as that organisation’s 2018 Innovative Product of the Year award for best monochrome copier. The Better Buys editors recognised Toshiba’s first-of-its-kind copier for its capability to produce both erasable and standard black prints while also presenting the product high marks for its impressive feature set and value.

The American Business Awards are the U.S.A.’s premier business awards program. All organisations operating in the U.S.A. are eligible to submit nominations – public and private, for-profit and non-profit, large and small. Nicknamed the Stevies for the Greek word meaning “crowned,” the awards will be presented to winners at a gala ceremony at the Marriott Marquis Hotel in New York on Monday 11 June 2018.