The rise of pun-filled business names 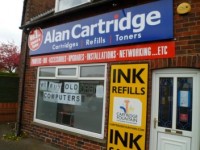 An article on the Mirror website highlights how many businesses in Britain have been given “wacky” names to make them “stand out from the crowd”, listing seven of the best named businesses.

Among those listed is Yorkshire-based cartridge refill shop Alan Cartridge, named after the comedy TV show character Alan Partridge, with the article quoting Partridge: “It might not be the most obvious link, but the verdict from us: back of the net!”