The hidden cost of e-waste 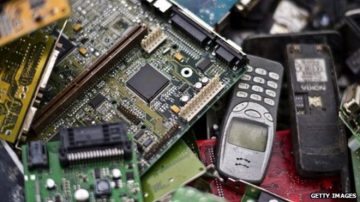 An article has criticised the devastating effects of wasteful electronics production on the environment, and suggested more needs to be done to promote reuse, rather than just recycling.

Writing for The Conversation, Josh Lepawsky states that when we think of e-waste, we normally think of consumer e-waste: The old printers, phones, computers and other devices that are specially disposed of when they become obsolete.

He argues that this is often regarded separately to producer waste, when instead they are “flip sides of the same coin,” and that by treating them distinctly, it “makes the mistake of presuming consumers have much in the way of meaningful choice in what their electronics are made of.”

Drawing attention to the wasteful effects of production, Lepawsky states that “no amount of post-consumer recycling can recoup the waste generated before consumers purchase their devices.”

He gives various examples, such as copper, pointing out that the electronics industry consumes the second-most copper of all industries, behind only the construction sector. Lepawsky also states that recycling copper scrap only satisfies “about 30 percent of world copper consumption… The rest needs to be mined.” He quotes figures from a US Geological Survey which suggests for every kilogram of copper that is mined, 210 kilograms of mine waste is created.

One of the world’s largest copper mines, Chile’s Chuquicamata, only needs to be in operation for around 12 hours before it has generated as much waste as all of Chile’s annual e-waste. “After a little over 48 days of operation, the Chuquicamata mine generates about the same amount of mine waste by weight as the total annual e-waste arising in China and the United States combined.”

Lepawsky also cites data from electronics manufacturers, which reveals that most of the C02 released over a device’s lifetime happens before it even makes it into the hands of the consumer. There is an additional problem of chemicals used in manufacture, where as many as four times the volume may be wasted as included in the final device. These chemicals can then enter the environment, or workers’ bodies, with dreadful consequences.

“Post-consumer recycling of electronics will never be enough,” writes Lepawsky, “we need to be able to repair — and upgrade — the devices we already have, if we are to slow our production of e-waste. Innovative initiatives that facilitate reuse and repair while also finding ways to offset e-waste that arises do exist. More are needed.”

He gives the example of the USA’s Repair Association, which is “advocating for consumers to have the right to repair the devices they purchase by enshrining those rights into law.” Although Lepawsky does not highlight them, remanufacturing trade associations such as ETIRA are also arguing for greater focus on reuse and repair.

Lepawsky concludes with some suggestions on how to address the problem created by this extra strata of e-waste: “The automobile, food and pharmaceutical industries have to show their products meet certain safety standards before they are put on the market. Why not demand the same of the electronics industry?” he asks. “Requiring electronics manufacturers to make products that are materially safer, durable and repairable would be important steps in mitigating waste from electronics throughout their life cycle in ways that post-consumer recycling on its own will never achieve.”