The greening of China’s industrial strategy

But a feature of China’s industrialisation that is decidedly unique is its strategy for supplying the energy needed for its industrialisation efforts. Alongside China’s “black” industrialisation strategy, powered by fossil fuels, has been a “green” strategy, focused on renewables and circulated resources – again, at unprecedented scale. China has been greening its energy and resources system at a furious pace, while maintaining a dependence on fossil fuels that is steadily diminishing. The chart below reveals how China has been ramping up its green electric power system to become the largest green electricity producer on the planet. The shift in electric power generation towards water, wind and sun as sources is clear – a 15% green shift in capacity in just the past decade, an enormous change for such a huge technoeconomic system. 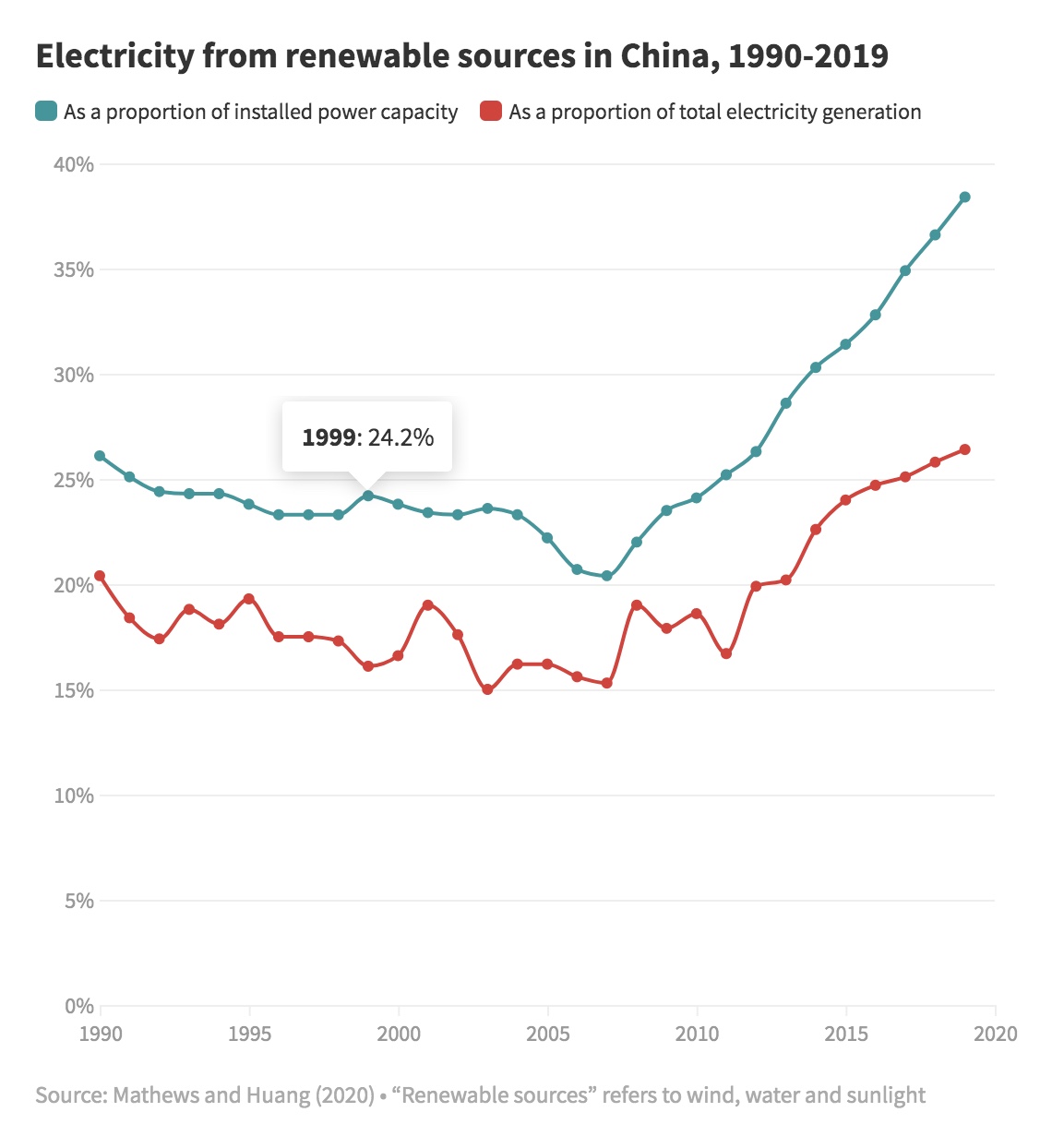 What is driving this green trend?

If China were to proceed with the typical industrialisation strategy – based on fossil fuels and the plunder of raw materials – then it would face insuperable problems. These would not just be problems of shortages of resources and immediate environmental problems, but most centrally problems to do with the geopolitical limits to a fossil-fuelled strategy relying on virgin materials. To put it bluntly, China would face entanglements in oil wars and resource wars if it were to pursue such a strategy at the scale of industrialisation it is managing – not to mention the burden on its balance of payments as it sought to raise its imports of these fossil fuels. It would mean a horrendous 21st century – for China and for everyone else.

As interpreted by China, a green growth strategy is not so much about a return to nature, but instead involves a clear reliance on manufacturing of energy, as well as greening of food supply through increased reliance on enclosed urban agriculture. The advantage for China of renewables technologies is that they can be manufactured domestically and enjoy economies of scale and cost reductions associated with the manufacturing learning curve.

It is not lost on China that these are all potentially the mainstream energy, transport and food production industries of the future, where the country’s state agencies clearly anticipate it will emerge as world leader, at the technological cutting edge. While the United States under President Trump battles to maintain the supremacy of its fossil fuel industries, China is forging ahead to dismantle its coal, oil and gas dependence and build strong renewables and resource recirculation industries based on its manufacturing strengths. This is what may be interpreted most accurately as China’s green growth industrialisation strategy.

When one looks at the scale involved in its industrialisation, China really has no alternative to a green strategy. And in the typical no-nonsense approach of the Chinese government, their leadership has adopted it with determination and ambition. As China adopts this green shift strategy, so it drives down costs for itself and for all – and makes such a strategy more accessible to other industrialising countries like India, Brazil or nations in Africa. And so the green shift that is initiated by China becomes a global green shift – even if it is complicated by further investments by Chinese state-owned enterprises in coal power as part of the Belt and Road Initiative. This in turn opens opportunities for companies and countries nimble enough to take advantage of them – including companies based in the US, the EU or Japan.

As China’s economy emerges from the Covid-19 pandemic, it can be expected to focus even more on this green growth strategy. After all, this is where China holds decisive competitive advantages in terms of manufactured exports and energy as well as resources security. The 14th Five Year Plan can be expected to place primary emphasis on both features of China’s industrialisation in the 2020s – the greening of its energy, transport and industrial systems, and the growing levels of resource recirculation (e.g. “urban mining” of electronics materials) as it pursues circular economy strategic initiatives.

At the time of writing, oil prices have hit a record low (even moving into negative territory) and so no doubt some tactical purchases are being made by China. But it would be a serious error to regard these purchases as deflecting China from its long-term strategy of green growth, and the energy and resource security it brings with it.

Author of this article is John Matthews: John A. Mathews is professor of strategy at Macquarie Graduate School of Management, Macquarie University, Sydney. He has specialized in the catch-up strategies of firms and countries in East Asia.

Unless otherwise stated, this work is under Creative Commons’ Attribution-NonCommercial-NoDerivs 2.0 England & Wales License and 2.5 China License.