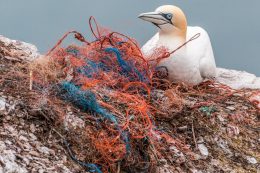 Some 80 percent of British consumers rate plastic waste as a serious environmental threat.

At the same time, 63 percent want industry to consider future waste problems at the production stage already. And consumer qualms are likely to grow because following the Chinese ban on plastic waste imports, the UK can’t dispose of waste properly at home. IFAT, the premier global trade fair for environmental technologies, has published its IFAT Environment Index 2018 detailing what consumers think about environmental problems and potential solutions. The survey asked 1,000 people in the United Kingdom.

The British government announced that until recently the United Kingdom had been exporting more than a quarter of its plastic waste to China. Following the import ban, around 500,000 tons of plastic annually will have to be disposed of elsewhere. However, in contrast to paper and glass, mono-fraction sorting of plastic waste isn’t possible – recycling is low value due to disposable material in particular. In a BBC interview, Simon Ellin from the UK’s Recycling Association said that he had no idea how the British waste industry would cope with the new mountains of plastic in the short term. He went on to say that the country lacked the relevant markets and that industry was facing huge changes.

The vast majority of British consumers view waste as an issue that affects every citizen and advocate responsible treatment of it (84 percent). Some 65 percent believe that it’s up to local authorities to manage waste disposal. Only 27 percent want industry to play the leading role in disposing of waste.

“The IFAT Environment Index shows that a large majority of British consumers support applying modern environmental technologies. Three quarters recommend making waste so recyclable in future that it becomes a valuable raw material,” says IFAT director Stefan Rummel. “A sustainable circular economy should replace exporting waste to Asia and recycle all plastics with the aid of high-tech environmental technology. Experts will be presenting ways of solving the pressing problems of plastic waste in the United Kingdom, Europe and across the world at IFAT, the world’s premier trade fair for waste and raw materials management, in Munich from 14 to 18 May 2018”.