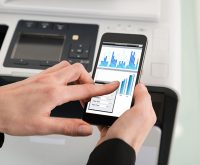 The wireless printer market is projected to grow steadily between 2017 and 2025 according to a new report.

In this report, the term ‘wireless printers’ refers to those that can be connected to devices such as smartphones and tablets “with the help of WiFi, Bluetooth and mediums such as AirPrint and Cloud.” The report reveals that the “global wireless printers market is expected to witness a steady growth during the forecast period due to its increasing adoption by the consumers as it helps them to operate multiple devices as a single unit.”

So-called “new-age” wireless printers, such as inkjet models, “are capable of ultra-high volume printing and they also reduce the average cost per colour impression”, which increases their demand. The wireless printer market has also been “revolutionised” by a sharp spike in the number of global internet users.

However, the high maintenance costs of wireless printers and their “various network vulnerability risks” could “inhibit” the market’s growth rate “to some extent” between the given period of 2017 and 2025.

In geographical terms, “North America held the largest share of the Wireless Printer market among the different regions in 2016 owing to the high demand for wireless management frame protection (WMFP) in this region.” Meanwhile, the wireless printer market in the Asia Pacific region “is majorly driven by Japan owing to the presence of a large number of wireless printer manufacturers in the country.”