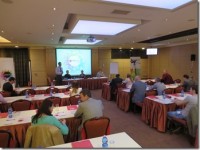 Attendees at the previous Static Control seminar in Bucharest

The seminar, which took place in Paris, saw “many smaller French remanufacturers and some distributors” attending to discuss the industry and listen to talks from both the largest manufacturer of aftermarket imaging systems and components and the European trade association.

ETIRA stated that the seminars are “useful info-sessions for learning the latest techniques and developments”, with Secretary General Vincent van Dijk urging attendees “not to sell clones”, outlining “the dangers involved when you trade clones”, such as the recent legal actions by OEMs in Europe and specifically in France, which The Recycler recently reported on.

Some of the companies attending the seminar in Paris were said to be those that are “generally less aware of the risks involved when trading clones, and therefore the event served to raise awareness among this key group”. ETIRA added that “when and where possible” it will “attend and present its views” at future Static Control seminars, in order to “raise awareness and educate the channel about clones”.

ETIRA previously attended Static Control’s seminars in Romania on 21 May and in Greece on 7 May, with Static Control reporting from its first seminar in Poland on 25 April. Its free seminar programme was announced in March, whilst ETIRA reported yesterday from The Recycler’s Focus on Europe conference.