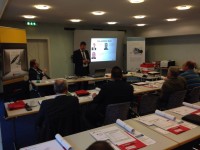 The largest manufacturer of aftermarket imaging systems and components hosted its second and third events of 2015 in Berlin and Tbilisi, adding that the programme of events “continues to flourish”.

The event in Berlin took place on 11 March, while the event in Georgia was held on 21 March, which were said by Static Control to have been “well-attended” by remanufacturers and industry representatives. The Berlin seminar saw a commercial presentation and technical demonstration, the latter covering the Lexmark CS/CX printer series and its “simple to remanufacture cartridge, [which] presents an excellent business opportunity”.

The German event also saw the company discuss the ColorControl Replacement Imaging System, with Static Control noting that the session “helped raise the importance of utilising the system’s quality and consistency standards to target OEM customers”. The seminar in Tbilisi meanwhile was held alongside authorised reseller Proxima, with discussions covering the products available for “many of the most popular engines in Georgia”, alongside technical demonstrations and OEM operations against clones.

Miguel Neureiter, Static Control’s General Manager for the DACH region in Europe, stated: “The feedback we received on this event was wholly positive and stressed that there is demand for more of these events in future. It was also gratifying to hear how happy our customers have been with our service since we opened our Frankfurt premises nearly two years ago.”

David Ratiani, Proxima’s Founder and Director, commented: “Thanks to Static Control’s and Proxima’s joint efforts, we are committed to taking the imaging industry to the next level in Georgia. This conference is a real breakthrough in providing all the market players with the most up-to-date information and profitable opportunities.”

Lasha Kukhalashvili, Director of Georgian remanufacturer Inco, called the Tbilisi seminar “eye opening”, particularly for “many of his customers who were also in attendance”, and noted that while his company has “for years explained the advantages and the technology involved when remanufacturing with Static Control products, it was ‘a different matter’ receiving this information directly from the supplier”.

Kukhalashvili also reported that he had “noted the increased customer confidence in their cartridges now that customers have witnessed the backing of Static Control first-hand”. Seminars are free of charge to Static Control customers, and future events are planned in France, the UK and Hungary “in the coming weeks”. The first event of 2015 took place in Albania in February, with those interested in details on further seminars asked to visit the company’s event’s page at http://www.scc-inc.com/aboutus/events.aspx.

The Recycler reported on the free seminars hosted by Static Control last year, including events in Croatia and Serbia, Italy, Latvia, France, Romania, Poland and Greece. The original programme was announced in March last year, and was expanded in September.