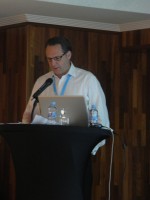 The largest manufacturer of aftermarket imaging systems and components stated that The Recycler’s 2014 conference was “once again a resounding success”.

Static Control stated that the conference, which took place at the Hotel Salles Pere IV in Barcelona, Spain on 5 and 6 June, and which it sponsored alongside Triton, OCP and CBC, “brought together delegates from all corners of the industry”, including remanufacturers, suppliers and resellers as well as empties brokers, industry analysts and cartridge associations.

Labelling the event “a resounding success”, Static Control noted that its General Sales Manager for Western Europe, Jason Doran, spoke at the conference, with his presentation, entitled Our own worst enemy?, looking at “how aftermarket members dealing in clones are affecting the whole industry”, as well as encouraging “more legal action from the OEMs”; “deterring users from other non-OEM consumables”; and “perpetuating the price war”, which “drastically limits the aftermarket’s growth potential”.

Ken Lalley, Sales Director for Static Control, commented: “We want to congratulate The Recycler for continuing to put on an annual event that always feels fresh and generates new ideas. Every year we come away with a renewed perspective as we’ve had the opportunity to hear the point of view of so many differing members of the remanufacturing community.

“We are proud to support valuable events such as this one, which encourages ideas from the very best of the industry’s representatives.”