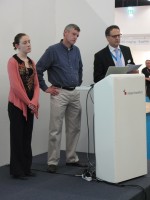 Static Control has thanked its customers for voting towards its two wins at The Recycler Awards, which were presented to European Managing Director Ken Lalley on behalf of the company in a ceremony on 1 February as part of Remanexpo@Paperworld 2015 in Frankfurt.

The ‘Innovation of the Year’ award was in recognition of Static Control’s COLORCONTROL Replacement Imaging Systems, with cartridges powered by the system allowing remanufacturers to offer a “premium remanufactured cartridge that can satisfy the most demanding of colour customers, those that currently purchase OEM cartridges”. A website, www.colorcontrol.info, was also developed by the company to help share the benefits of the system along with other marketing materials for remanufacturers to use to sell to end users.

The ‘Supplier of the Year’ award comes after the company launched more than 1,300 new products last year, including over 550 inkjet products in Europe at the end of 2014. Static Control added that “intellectual property due diligence is conducted on each product” it releases. The company’s hosting of a multinational seminar programme last year as well as expanding its online ordering system also helped it to win the award.

Commenting on the achievements, Lalley said: “These awards are particularly valuable to us because the remanufacturers are the ones who made the nominations and voted. For that reason, I would like to thank our customers for casting their votes for us. We work hard to every day to give our customers the best experience possible and this kind of positive feedback means the world.”

The company also gave presentations and three technical demonstrations as part of the REMCON seminar programme at the event; with one presentation, titled Our own worst enemy?, delivered by Doran alongside Lexmark’s Worldwide Brand Protection Manager Andrew Gardner and HP Product Development Engineer Bernadine Maher.

The presentation centred on the intellectual property issues surrounding the aftermarket industry and featured twice over the show’s four days, with both occasions having “standing room only” due to their popularity.

Doran said: “We are privileged that Lexmark and HP accepted our invitation to join forces in this way. Both Bernadine and Andrew did an excellent job in demonstrating the common ground between OEMs and genuine remanufacturers with regard to clones and intellectual property issues.”

He added: “We extend our thanks to both Lexmark and HP for agreeing to join us in addressing these issues. At Static Control we hope that they will continue to provide their input into our seminars throughout 2015, and we will welcome contributions from all printer OEMs who wish to make their position known.”

Petrit Levendi, CEO and Managing Director of Colombo sh.p.k, attended the event and commented: “We leapt at the chance to hear from Lexmark and HP. We greatly appreciate being addressed directly by the OEMs, as it provides us with a clear perspective on where they stand. It is particularly encouraging to have the distinct difference between clones and the genuine remanufacturing industry acknowledged by them.”

You can read our Remanexpo@Paperworld 2015 show report in the next issue of The Recycler, as well as online coverage from each day of the show on our website.