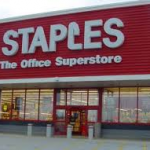 The company is one of many that have fallen flat this week.

A report from 247 Wall Street shows that predictions by S&P Global Market Intelligence who said that “the S&P 500 would shrink by about eight percent in the Q1” have been proved correct.

Amongst the cited companies is Staples Inc. who after their merger with Office Depot Inc. was blocked are seeing an “incredible fallout as their merger premium pricing is being removed by the markets” states the report. The regulators denied the merger of these two companies on an “antitrust basis” as they felt that this would harm competitors in the same division of the wholesale industry. After this decision was made, Staples Inc. and Office Depot Inc. went to the top of the list “that destroyed companies”.