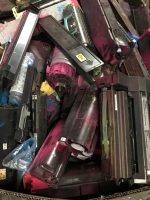 A recent article sheds light on the state of cartridge collection and recycling in Spain and Catalonia, and suggests a link between incorrect recycling of toner cartridges and the risks of explosion.

Spain’s Lavanguardia reports that under new WEEE legislation, it has been mandatory to recycle printer cartridges containing chips since last August, with businesses required to take charge of their own collection and management, in a bid to recover 65 percent of the average weight placed onto the market in the previous three, or 85 percent of the waste generated throughout the year.

However, this is only half the story, with incorrect recycling still presenting a serious risk due to the explosive nature of used toner powder.

“Only a few plants throughout the country are authorised to carry out the new management process derived from the consideration of this waste as WEEE,” said Gabriel García, General and Operations Director of Recyclia, which focuses on collecting and recycling WEEE, and has around 1,600 cartridge collection points throughout Spain.

“Most of the components of the cartridges present no difficulties,” García explained. “You can take advantage of practically everything: plastic, metals and chips, basically. The most dangerous thing is the dust in suspension of the toners, which is highly explosive.”

Because of this dust, “toner and ink cartridges are some of the most expensive WEEE to manage,” García added.

Yet there are some companies in Spain capable of weathering the risks and making a success of cartridge recycling, such as I2ma. Director Rubén Barberà explained to Lavanguardia: “We have devised a system to make it heavier and thus avoid the risk of it exploding.”

“Every month, between 600 and 800 tonnes of toner ends up in landfills,” Barberà continued, denouncing the fact that enforcement of the new WEEE directive is not as stringent or effective as it should be.

“Eight months have passed since the entry into force of the new regulations,” he lamented, “and administrations still do not enforce the law, allowing between 600 and 800 tonnes of toner to end up in landfill each month.”

Barberà’s colleague at I2ma, Elena Ey, added: “In Spain it is estimated that some 4,000 tonnes of toner waste are generated per year, less than 30 percent is reused and the rest should be treated. There is also an amount that cannot yet be calculated from imports from Asian countries and compatible cartridges.”

There are fifteen plants authorised to receive toner in Catalonia, albeit they are not all authorised to recycle it. In 2018, 544 tonnes of toner was recycled in the autonomous region, according to Pilar Chiva, Director of the Area of ??Circular Economy of the Agència de Residus de Catalunya.

To find out more about I2ma, check out The Recycler’s Inside Track feature with Rubén Barberà in Issue 316, available online here.