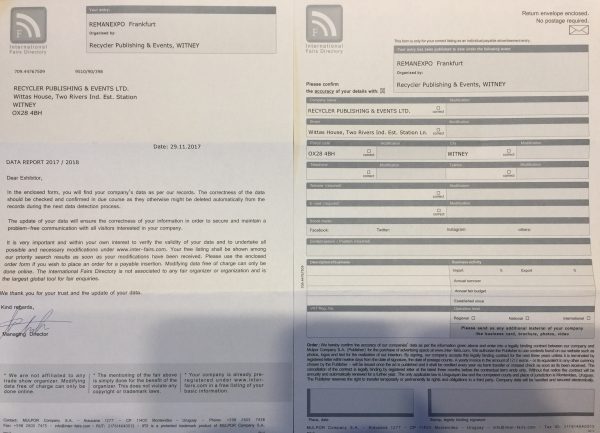 The International Fairs Directory has resurrected its ‘Expo-Guide’ scam in the lead-up to Paperworld 2018, being held in Frankfurt from January 27-30.

The Directory’s scam letters have been received by exhibitors and passed on to The Recycler. As before, the letter asks the exhibitor to update their data ‘in order to secure and maintain a problem-free communication with all visitors interested in your company.’

It goes on to say that ‘It is very important and within your own interest to verify the validity of your data and to undertake all possible and necessary modifications under www.inter-fairs.com. Your free listing shall be shown among our priority search results as soon as your modifications have been received.’ It also includes an enclosed form ‘if you wish to place an order for a payable insertion’, and is signed by the “Managing Director”.

This latest letter related to Remanexpo in Frankfurt next year. Companies undertaking this scam have been operating for many years and regularly target thousands of businesses worldwide. The Recycler has reported on the similar Expo-Guide scam for the past few years, in 2010, 2011, 2012, 2013, twice in 2014 – once for the Dubai show and once for the Germany show – and in March 2015, before receiving another in July and September. The Recycler also received a new events scam letter in May 2016, while industry company CIT also received the letter in November 2016.