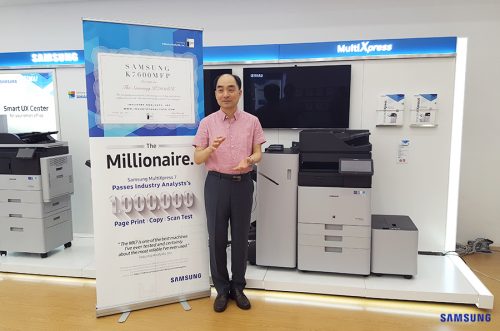 The Project Lab is described as “the project leader in planning and developing new products – from ensuring quality and managing costs to meeting delivery time”.

Kim joined Samsung and simultaneously began his work for the Project Lab in 2004, initially starting off developing mid-to-high level printers and colour copiers, before he began helming the MX7 project. Kim explained that the Project Lab “gets deeply involved in all aspects of development projects, working through every obstacle faced by each competent technology development team until the task is complete.”

Capable of printing 1.2 million pages, the MX7 series has developed a reputation for “durability and longevity”, in particular its low jam rate. The project “required the development of printers that were approximately three times better in terms of toner yield and durability, a major upgrade from what had come before.”

Initially there were doubts among Samsung engineers as to how successful the MX7 project would be but “Kim and his team were committed to making it happen.”

Its success was partially attributed to the team’s cooperation with “an overseas research institute” based in Yokohama, Japan, where Kim and his colleagues spent eight months, fusing the Japanese “strengths in fine-tuning design parameters for electrophotography and the Korean team’s knowledge and experience in manufacturing”.

Two of the crucial technologies which emerged as a result of this collaboration “are related to developer life and fuser belt design.”

The developer in the Mx7 series “draws toner powder and moves it to the OPC surface.” Samsung’s developer can print up to 1.2 million pages before it needs to be replaced.

“In an office that prints 10,000 pages a month, MX7 developer unit can last for up to ten years,” explains Kim. “When we developed the unit, there even were worries that we might not be able to sell enough developers because the first developer will last too long.”

Once the developers have transferred toner powder onto paper, “fuser rollers then press the papers with heat to bind the toners to the paper.” These rollers require highly durable belts which must “revolve 3.5 million times without failing.” In order to design a belt like this, Samsung’s engineers selected “core technologies” and managed them closely on a week-to-week basis to “create a long-lasting fusing system, which included two A1 level patents”.

Questioned about future printing industry trends, Kim explained that “decreasing cost per page […] will continue to be one of the top issues, and that a key way to achieve that is through more efficient use of consumables.”

Next on the agenda for the Project Lab is to “refresh the existing MX2, MX3 and MX7 printer series.”

“We are planning to improve each unit’s performance by increasing the life of printer consumables. By enhancing the quality of both customer replaceable consumables like toners and field replaceable units like fusers, we plan to achieve a lower CPP as well as a more affordable device price,” Kim added.

“Although each lab is in charge of developing different component technologies, the Project Lab analyses technology trends and draws the blueprint for the entire product’s R&D. We act as a bridge between each of the component technologies and work to fill the grey zone that exists between the labs,” he continues.

“I would venture to say that everything begins and ends at the Project Lab. Product development starts with our research and decision and ends with us testing and refining the quality. I want to continue to be the glue that holds everything together, bringing the best products to life,” Kim concluded the interview.