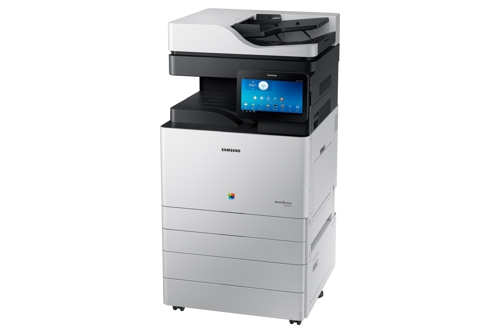 Samsung Electronics Co. has announced the release of the latest edition of its Android-powered multifunction printer MultiXpress.

The MultiXpress 4 Renovation (MX4-R) comes with a 10.1-inch touch display. As the device runs via the Android platform, Samsung has explained that “users can directly print without having to connect it with computers.”
The OEM first showcased the MultiXpress series in 2014, “which grabbed the market’s attention as the industry’s first smart printer running on Android.”

The MX4-R printer consists of a white body, with paper drawer located on the side of the device. According to Samsung, the MX4-R offers a maximum printing speed of 120 pages (black and white) and 100 pages (in colour) per minute.

The MX4-R will be released in both a colour and a black-and-white version, and each version will come with three different editions. The colour version “also comes with 10 percent higher cartridge capacity than its predecessor, with that of the black-and-white product being 17 percent higher.”

This latest product release from Samsung also comes with the CounThru solution, which “helps users manage different printing devices, along with the SecuThru program, which enhances security for confidential information.”