Ricoh dubbed Company of the Year

Ricoh Company, Ltd. has announced that it has been named Company of the Year at the Ireland Japan Business Awards 2018.

Mr. Akira Oyama, Corporate Executive Vice President and General Manager of the Sales and Marketing Group, Ricoh, accepted the honour at an awards ceremony held in Tokyo last night from His Excellency Paul Kavanagh, Irish Ambassador to Japan. Judges were impressed by Ricoh’s growth and investment in Ireland, as well as its commitment to the community, sustainability and charitable causes.

Speaking at the awards ceremony, Mr. Oyama said: “This award reflects the wealth of symbiotic economic opportunity that lies in Irish-Japanese relations. Since the 1980s Ricoh Ireland has gone from strength to strength and as it grows, so too does the local team’s impact on the Irish economy. We are consistently impressed with how the team there is extending the Ricoh ethos and values to benefit the greater community, too.

“We are committed to profitable growth and see our partnership with Ireland as integral to this. Ricoh Ireland is a great success story for us – on both sides of the globe – and we will continue to invest in our Irish team as the market grows.”

The award follows significant investment from Ricoh in the Irish market. In February 2017, the company opened its new Irish HQ in Dublin on the back of a €6.5 million ($7.3 million) investment. This is allowing Ricoh Ireland to more than double its workforce to 190 by 2020 and increase revenues to €32 million ($36.3 million) in the same period.

As it reinforces its economic position in Ireland, Ricoh continues to be a socially active and prominent member of the business community. It is certified with the Business Working Responsibly Mark, awarded by Business in the Community Ireland. The distinction underlines Ricoh’s dedication to promoting CSR initiatives within its own business and throughout local communities. 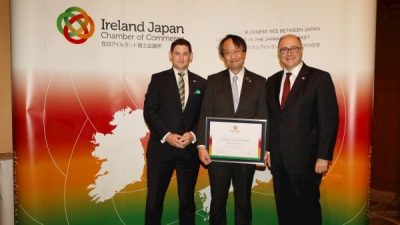 In the last year alone, the company has donated €175,000 ($198,604) worth of managed document services technology to Temple Street Children’s Hospital and €30,000 ($34,047) worth of collaborative technologies to FoodCloud, the platform that allows businesses to donate unsold fresh food produce to local charities.

Ricoh also works with Irish-based organisations to help them use technology to increase productivity and drive innovation. This year, Ricoh research, in collaboration with Oxford Economics, found that optimised offices could unlock €3.4 billion ($3.8 billion) for the Irish economy. By encouraging businesses to create an environment that embraces varied individual workstyles, Ricoh is helping Irish businesses maximise revenues and their company’s contribution to the economy.

Phil Keoghan, CEO, Ricoh Ireland & UK, said: “This is a tremendous honour for the team in Ricoh Ireland and is testament to the great work that they do not just for the company, but for the community around them.

“Ricoh’s relationship with Ireland started in the 1980s when 34 Irish graduates joined Ricoh in Japan through the Irish Government’s FÁS training scheme. Almost four decades on, Ricoh Ireland has become a shining example of the positive impact that global organisations can have on the communities in which they operate.”

Mr. Paul Gilsenan, President, Ireland Japan Chamber of Commerce, said: “Despite their positions on the world map, Ireland and Japan have a long history of doing business together and these awards celebrate that. Companies like Ricoh show that distance is not a barrier to business. It perfectly demonstrates how enterprises in our two countries are working in harmony to benefit not just one another’s economies, but the people living in them, too.

“We are honoured to be presenting these awards in the presence of His Excellency Paul Kavanagh and look forward to seeing Ricoh continue to flourish in Ireland.”