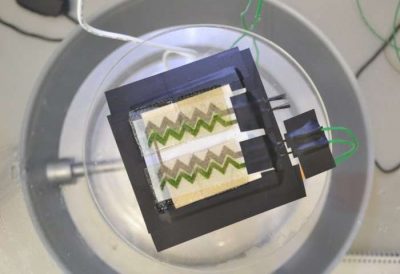 A team of UK scientists have made a bio-sonar panel using micro-organisms and a standard inkjet printer.

Newsweek has revealed that scientists from Imperial College London and Central Saint Martins have collaborated to create a “bio-solar panel using a micro-organism called cyanobacteria, which uses photosynthesis to harvest energy from sunlight.”

The researchers used the micro-organism as an ink, printing it onto paper “alongside electrically conductive carbon nanotubes” with the aid of an “off-the-shelf inkjet printer.”

These bio-solar panels could have a number of helpful health-related applications, including as “paper-based diabetes monitors and air quality sensors”.

This latest breakthrough “is part of a new type of renewable energy research” called microbial biophotovoltaics (BPVs). Using a standard inkjet printer “significantly reduces the cost of producing BPVs” which helps in the development of this technology.

“Paper-based BPVs are not meant to replace conventional solar cell technology for large-scale power production, but instead could be used to construct power supplies that are both disposable and biodegradable,” explained Andrea Fantuzzi, who is one of the study’s co-authors and works in the Department of Life Sciences at Imperial College London.

“Their low power output means they are more suited to devices and applications that require a small and finite amount of energy, such as environmental sensing and biosensors.”

These new super-thin solar panels could potentially “make their way into commercial applications” over the next few years and could provide “inexpensive, widespread solar adoption on small and large surfaces”.

“We think our technology could have a range of applications such as acting as a sensor in the environment,” said Marin Sawa, another co-author, from the Department of Chemical Engineering at Imperial College London.

“Imagine a paper-based, disposable environmental sensor disguised as wallpaper, which could monitor air quality in the home. When it has done its job it could be removed and left to biodegrade in the garden without any impact on the environment.”