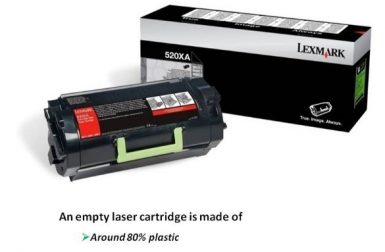 A new presentation by Lexmark demonstrates the value of remanufacturing for generating employment as well as benefitting the environment.

Published on BusinessEurope, the presentation explains how cartridges can be remanufactured “with the same equipment and Lexmark processes” as an original, thereby ensuring “the same quality standard as a new product.”

It goes on to state that over a third of printer cartridges sold by the OEM in Europe are “collected after usage for the purpose of being remanufactured or recycled”, thus making sure that nothing goes to landfill and none are incinerated. Of those cartridges collected, 60 percent are recycled while the remainder are remanufactured.

Lexmark explained that this “Made in the EU” business model not only offers benefits in terms of business and the environment, but also helps to generate jobs.

The OEM concluded by saying that it intends to help the industry reduce the amount of cartridges being sent to landfill or incinerated to zero, and commented that “green public procurement can play a significant role” in the achievement of this aim. However, in order to bring it about, “concrete measures” are required; among them, industry targets, incentives, and cross industry initiatives.

Lexmark is a founding member of Conseil Européen de Remanufacture (CER) and states that the goal of this organisation is to “triple the value of Europe’s remanufacturing sector to €100 billion ($115.6 billion) by 2030”.