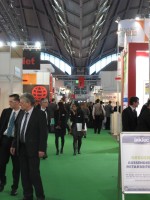 The event’s busiest day saw most exhibitors meet old and new customers, with a busy seminar programme and party evening combining to create a day focused on conversation.

Commonly said to be the event’s busiest day, Monday did not disappoint, with large crowds of visitors filling the hall’s corridors and the majority of exhibitors booked up with many important meetings.

DCI/Jet Tec’s Phil Sneath noted in the morning that “today will be our busiest day”, adding that the company was awaiting “10 or more meetings – the show has been beneficial for us”. Later in the day, Static Control’s Ken Lalley stated that “throughout the period of the show we have been busy” with meetings with customers, noting that the show had created a “lot of interest in our message”.

Producton’s Robert Pufan meanwhile mentioned that the event had been a great focus for the company, which “doubled the size of our team” for Remanexpo Europe. Pufan added that Producton utilised the event to “gain thrust in EU business sales and gain new contacts from around the world”. Amidst the great deal of business being conducted a second raid by German customs was mounted against an exhibitor in the hall – this time Taiwanese company Uniplus Technology was raided, after Ninestar on Saturday afternoon. 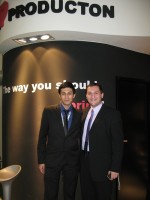 The seminar programme also boasted a busy schedule, starting with Sanjeev Mahajan’s overview of the chemical toner market. Mahajan’s aim was to “try to explain the toner market and what you can do differently with chemical toner”, noting that NAND ipl had taken advantage of its own use of nanotechnology to boost efficiency and quality in its own chemical toner products.

Infotrends’ Andrew Carroll took the topic to inkjet with his discussion of the opportunities in business inkjet, a subject that appears to be gaining significance in the market and beyond. Carroll noted that there were both advantages and disadvantages to the business inkjet market, and that it “won’t be the next 12 months that determine” the market’s possibilities but “the 12 to 18 months after”.

After Environmental Business Products’ second presentation of their Helpful Printer Driver at the show (which you can read more about here), MSE’s Mark Dawson concluded the seminars with an impassioned talk about selling value not price, noting the fact that many companies sell original cartridges at a far higher margin than remanufactured. Dawson contended that the market could fix this by using “intelligent positioning” and by building a pricing strategy based on reality.

Monday’s events ended with a series of exhibitor parties taking place in the hall, with KMP and ARMOR hosting live music acts and open bars for exhibitors and visitors to enjoy on the final night of the show, before its close later today. 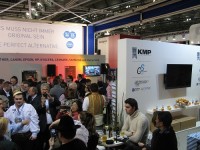 The party at KMP’s booth in full swing

Moving on to the final day of events, talks in the Exposé room begin at 11.00 with a repeat of Sanjeev Mahajan’s talk on doing business in India, followed at 12.00 by the last chance to see Environmental Business Products’ discussion and demonstration of its Helpful Printer Driver. The show’s seminar offerings conclude with a repeat of David Connett’s talk on email marketing at 13.30, before Connett then closes the show with an overview at 15.00.

Issue 242 of The Recycler, which will be sent to subscribers in mid-February, will feature a comprehensive review of the show including exhibitor spotlights, pictures from the event and seminars and much more. For the latest reactions and news from the show, keep visiting www.therecycler.com.