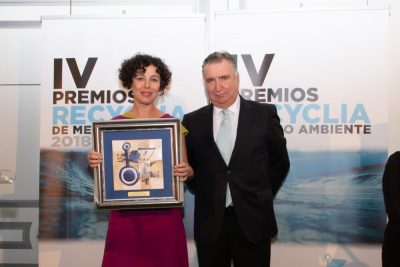 The organisation recently hosted its 4th Recyclia Awards for the Environment and has announced the winners of each category.

As Recyclia explains, the awards “recognise the work of people, entities and media in favour of sustainability and, particularly, the promotion of the recycling of electronic waste and batteries.”

On this occasion, the Ministry of Environment and Planning of the Andalusian Regional Government scooped an accolade in the category ‘Greater Support of a Public or Private Entity to the Promotion of Recycling’, thanks to its “efforts to raise awareness and promote the habit of recycling electronic devices”. As a result, Andalusia successfully managed 43 million kilos of e-waste in 2017.

The award was collected by José Luis Hernández Garijo, Deputy Minister of Environment and Territory Planning of the Junta de Andalucía.

The winner of the award for ‘Greater Support of a Personality to the Promotion of Recycling’ was won by Pedro Romero, a member of the mountain bike team Extremadura-Ecopilas, who has been involved in the recycling of batteries and participated in various collection campaigns.

In the category of media publications, Professional Waste scooped the accolade due to its “special focus on the day-to-day monitoring of the electronics recycling sector and in its analysis, through important national and international firms”.

Lastly, Maria José Celada was handed the award for “Best Work of a Journalist to the Dissemination of Recycling”, which recognises her long career in journalism and “her outreach and ability to combine, in equal parts, entertainment and awareness of the importance of preserving the environment”.