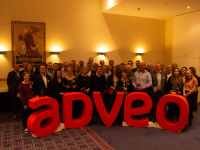 The beleaguered company staged a social and business event at Disneyland Paris last weekend, bringing a positive feeling back after recent turbulence.

The event brought together employees and partners of the supplier from across the world, replacing the previous nationally-focussed events. According to KBM, separate Benelux awards were also presented, with Maul receiving the prize for biggest growth based on a new product range, Double A Paper winning for largest growth in an existing range, and 3M taking the strategic partnership prize. Ann Biebuyck, Purchasing and Merchandising Director for Adveo Benelux, said: “The company received the prize because they share all the tools with us. All our media were involved.”

Alongside the awards ceremony, the event brought plentiful opportunity for suppliers and retailers to meet, network, and do business, including a Speed-Dating With Dealers event.

“The advantage was that you could speak to each other in your mother tongue,” explained Adveo’s Country Director for The Netherlands, Erwin Snoeker.

Biebuyck added: “This set-up works well, as we already saw at the Meet Adveo event in Scheveningen in June.”

Dealers could also attend an exhibition hosted by Adveo Europe, which saw small groups given guided tours of the exhibition floor. Proceedings culminated in a “spectacular” party at Walt Disney Studios.

Despite recent troubles for the company, Biebuyck and Snoeker were upbeat: “There is plenty of confidence in the Benelux,” the pair declared. “We received a lot of positive feedback and we are happy with that. The suppliers also need us. And the customers want a strong Adveo. We will continue to take care of this in the future.”