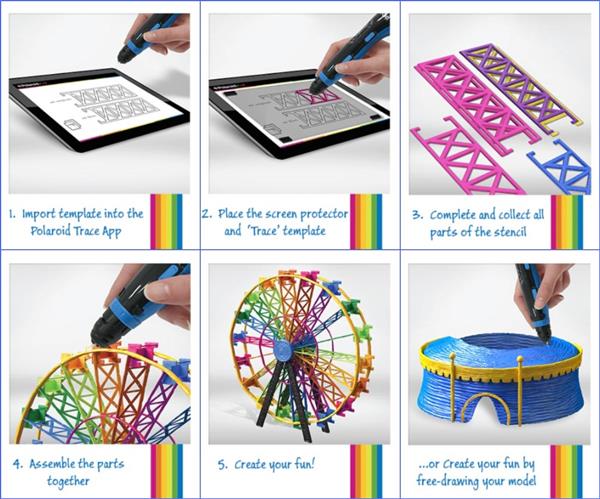 The Polaroid Play pen is now available in the European market.

Polaroid and UK remanufacturer Environmental Business Products (EBP) signed a deal last year for the latter to produce a 3D printer, the Polaroid ModelSmart 250S, and consumables for the global brand. Now, the two have partnered on 3D pens, with the Polaroid Play now available in the European market for €39.99 ($42.47), with 3Ders reporting on the launch.

The site stated that “at CES 2017 […] Polaroid announced some products that piqued our interest”, including “three new desktop 3D printers and two 3D pen models”, with the Polaroid Play “not marketed as a professional design tool, but rather a playful, creative tool”. The site added that “we can tell from the 3D pen’s name, as well as its affordable cost” that this is the case, and that the pen “uses hot tip technology to melt plastic filaments as they are extruded”.

Users also have “the option of employing either a manual or automatic extrusion function, and can choose from a variety of print speeds”, while “in terms of material”, it offers a range of “colourful” 1.75mm PLA filaments in 20 “fantastic” hues, but “at least for now, the only colour the pen comes in is a black and blue combination”, though “other colours may follow”.

It is accompanied with a companion app called Polaroid Play Trace, which gives users “the ability to turn any photo into a stencil, which they can then trace over with the 3D pen to create some very cool and quite elaborate 3D models”, though the pen can “of course […] also be used freehand”. It is aimed at “ages 14 and up”, and comes with “notable safety features” including “automatic turn-off” and “an auto-retraction feature that will retract filament if the pen is inactive for 10 minutes”.

The auto-retraction feature aims to “help prevent filament blockages”, with the site adding that in addition to the pen, Polaroid and EBP released “10 new universal filament materials” in 40 colours for FFF and FDM 3D printers. These include premium PLA, ABS, PETG, flexible, PVA and “a number of composites such as P-Copper, Elastic, P-Wood, P-Aluminium, and P-Carbon fibre”, which can all be used with Polaroid’s Precise filament holder and scale to measure and weight filament amounts.

Scott W. Hardy, President and CEO of Polaroid, said: “We’re excited this year to expand our 3D offering in Europe. Inspiring creativity has always been at the heart of the Polaroid brand for 80 years, and the Polaroid Play 3D pen provides consumers with a new fun and easy outlet to express themselves.”