Over one million counterfeit products seized in UAE by HP

Raids conducted by HP in the United Arab Emirates sees over one million counterfeit printing products seized since last year. 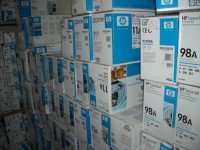 The anti-counterfeit raids have been conducted after co-ordination with HP, which has worked with law enforcement agencies in the region as part of its anti-counterfeit programme, reports ITP.net.

The OEM’s programme has “conducted nearly 1,000 investigations in the EMEA region in the past four years”, resulting in nearly eight million counterfeit products being seized and more than 600 enforcement actions.

Amin Mortazavi, General Manager of Imaging and Printing Group, HP Middle East, commented: “HP appreciates the cooperation of the Dubai Police and its continued prosecution of counterfeiters who try to defraud innocent customers […] we look forward to further collaborations to eliminate fake products to ensure that people receive genuine products of original quality and reliability.”