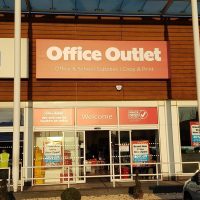 According to the Express & Star, eight jobs will be lost in the West Midlands town following the closure of the store, which was formerly Staples until the UK wing of the company was bought and renamed by Hilco in 2016.

An Office Outlet branch in West Bromwich closed over the weekend, with the Walsall store, at Crown Wharf Retail Park, set to shut the doors for the last time on April 10. Outlets at nearby Kidderminster and Telford are currently still trading.

Altogether, Office Outlet has 90 branches across the UK, with 1,200 jobs at risk. 161 jobs will be cut from the first round of store closures, which will also hit Beckton, Catterick, Gloucester, Newport (Isle of Wight), Merton, Newcastle, Plymouth, Staples Corner, Stratford, Cardiff, Carlisle, Manchester, Old Kent Road, Southampton, and Weston-Super-Mare.

106 staff were made redundant at the firm’s head office and distribution centre in Daventry.

Deloitte’s Richard Hawes, who has been appointed joint administrator for the company, commented: “While we are still open to a sale of the business in part or in whole, we cannot continue trading all the stores indefinitely in an administration process. Regrettably therefore we are announcing store closures that will result in a number of redundancies.”

“We will be keeping staff informed of further developments in the coming weeks in what is a difficult time for all those involved,” he added.