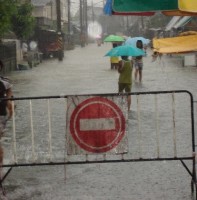 Several OEMs have revealed production problems resulting from the severe flooding across Thailand.

The OEM told Amateur Photographer on Friday that it has now issued a “recovery task force” to attempt to alleviate supply issues by transferring production to other sites.

Canon today expressed its condolences to the victims of the flood, which has so far claimed more than 300 lives. The company is to donate 50 million yen ($650,350/€473,705) to assist with relief efforts. An inkjet factory in the Rojana Industrial Park, Ayutthaya is closed due to flood waters inside the facilities, while another has been closed after being cut off.

OKI likewise has a plant in the Rojana Industrial Park, and reports that while no employees have been harmed, production at the factory has been temporarily suspended.  The company was unable to confirm when operations would resume, and said it would advise on the effects of the plant on its overall business once it had investigated further.

Ricoh meanwhile maintains two facilities in Thailand, but so far neither has been forced to close by the rising waters. However, the Ricoh Manufacturing (Thailand) Ltd plant in Amata City will be halting some of its production lines from today, as several suppliers in the north of the country have been closed.

The facility produces monochrome laser printers for shipment around the world. A second plant in the Lamphun province which produces OPC drums is unaffected.