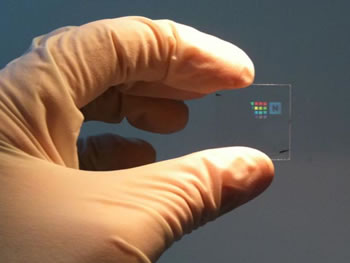 Proactive Investors reports that Nanotech Security is looking to enter the $2.5 billion (€1.8 billion) market in product authentication with the development of its KolourOptik technology, which is set to replace holograms and other methods of identifying authentic products due to a number of advantages.

First researched and developed at Simon Fraser University and later licensed to Nanotech Security, the nanotechnology for “securitisation, authentication and branding” will attempt to tackle the global issue of counterfeiting, with 10 percent of the world’s goods said to be counterfeit, resulting in $650 billion (€490 billion) in losses each year.

The technology platform is “based on the effects of a Blue Morpho butterfly’s wings” and involves a “shimmering iridescence colour” that is created by the “reflection and fragmentation of light waves off of a matrix of nano-sized holes” that have been drilled into a number of different materials using “patented algorithms coupled with electron and ion beam technology” to produce “highly secure anti-counterfeiting images”, said to be more effective than traditional technologies such as holograms and colour shifting inks.

According to the company, KolourOptik images, which create “unique optical light signatures for enhanced security, can be applied to “virtually any surface” and can also be turned on or off. Doug Blakeway, Chief Executive of Nanotech, said: “Our technology can go directly on the surface, and has very high resolution. It is extremely bright when you see it, with much sharper definition,” which he says allows for “instant detection at a distance”.

The company is planning to focus the technology on three areas – banknotes and coins; secure documents, including driving licenses, visas and passports; and the consumer luxury product market, such as designer branded products.

The article also states that the technology will be used for technology products. Including ink cartirdges, with 1.3 billion legitimate ink cartridges shipped in 2012 but an estimated $3 billion (€2.26 billion) in counterfeit toner and inkjet cartridges sold in the same year.

“We are working to replace holograms that are outdated,” said Blakeway. “As the market demands more complex holograms for authentication with more features, they get thicker, bigger in size and harder to apply. They are also more expensive to produce, while KolourOptik completely transcends these issues.”

He added that the technology is “virtually impossible to duplicate, as processes are eliminated as you make the finished product. Additionally, if you try to reverse engineer the technology, you would need complex (patented) algorithms as well as very sophisticated and expensive high-tech machines, a class 100 clean room and the people trained to operate them.”