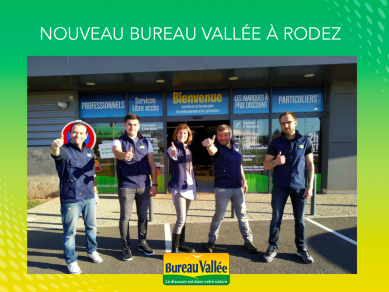 Following the opening of two new stores last year, Bureau Vallée has announced the unveiling of a new location, this time in Rodez.

Making the announcement of the grand opening of its latest store in Rodez, Bureau Vallée has offered its congratulations to “Séverine [Mercadier] and her team for the success that meets the opening of her store”.

Bureau Vallée is a franchise specialising in “a wide range of stationery products for professionals and individuals”, including ink cartridges and toners offered at discount prices, as well as printer accessories, printers, scanners and a variety of other items.