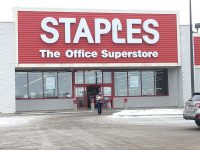 The office supply giant is further reducing its footprint in the United States, with two stores and a warehouse the next to say goodbye.

The retailer’s branches in Minot, North Dakota, and East Longmeadow, Massachusetts, will bring down the shutters for the final time on February 8 and March 8 respectively.

The East Longmeadow store has been trading since February 2004, according to MassLive, whilst the Minot Daily News reports that the Minot outlet will close a week before the twentieth anniversary of its opening, in February 1999.

“We continually evaluate our store performance to ensure we’re operating the business in the best way,” explained Staples spokesperson Jocelyn Thomas. “As customers shift online, we are taking aggressive action to right-size our retail footprint. We are committed to providing great service and every product businesses need, whether it’s in-store, online or through mobile.”

The company has also announced that its fulfilment centre in Hanover, Maryland, will close for good on March 16, with the loss of all sixty-one workers presently employed on the site.

Fox Baltimore reports that the notice was posted with Maryland’s Department of Labour, Licensing and Regulation earlier this week.