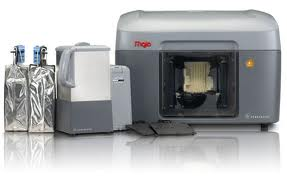 A Massachusetts Institute of Technology team has potentially solved one of desktop 3D printing’s biggest drawbacks.

A team of engineers at MIT have demonstrated a 3D printer with the capability to print at ten times the speed of its consumer counterparts, reports Brian Heater for TechCrunch. The engineers claim that objects which would usually take an hour to print can be realised in a matter of minutes.

Heater suggests that the arduous wait for results was one of the primary reasons behind the failure of desktop 3D printing to ever quite take off amongst consumers. This new model however, remedies that issue: Using the same technology of regular desktop 3D printers, the Massachusetts-based engineers amended the print head, allowing filaments to feed through at a higher speed than previously.

“I would be thrilled if it reaches the market,” said Associate Professor John Hart. “We’re not sure of the path it will take yet. We may start our own company that will make or sell these faster desktop printers, or work with an existing 3D printer company to license the technology into their current machines.”