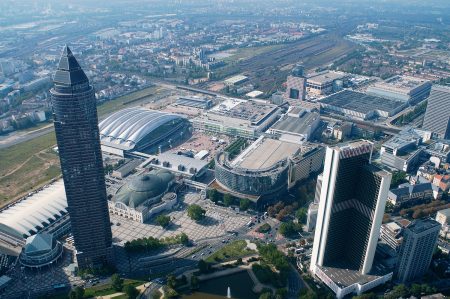 The German exhibition complex’s new Hall 12 was officially opened this week, after two years of construction.

Mathias Samson, State Secretary in the Hessian Ministry of Economics, Transport and Regional Development, paid tribute to Messe Frankfurt in his welcome speech: “Messe Frankfurt is one of the most important global players in the trade fair sector and a prime example of Hesse’s economic success. It makes full use of the possibilities offered by digitisation to develop new marketing concepts while aware that there is no substitute for direct contact and personal interaction. Because of this, trade fairs will retain – even in the digital economy – their function as meeting places for the industry and showcases for business. They are synonymous with international trade and the free movement of goods and services – in other words, with principles that have led to jobs and prosperity for Germany.”

Peter Feldmann, Mayor of Frankfurt am Main and Chairman of the Messe Frankfurt Supervisory Board, was particularly impressed by the hall’s outstanding architecture: “Two years ago, we laid the foundation stone for Hall 12. Even at that early stage, we could see from the blueprints and pictures what exceptional architecture we could expect. All of our expectations were surpassed and Hall 12 is now yet another architectural highlight on the Frankfurt exhibition grounds.”

“At peak times,” Feldmann continued, “there were more than 800 skilled tradespeople working on the site of the 34,000 m² hall simultaneously. Its floor space is equivalent to the area covered by five football pitches. A total of 800 parking spaces are available in the adjacent multi-storey car park. Approximately 600 kilometres of data and low-current cables were laid, together with 50 kilometres of cables for building control technology. There are also 46 ventilation systems, 50,000 square metres of ventilation ducts, six cooling units, 34 kilometres of heating and cooling lines, 160 radiators, 25,000 sprinklers and 11.2 kilometres of stainless steel drinking water lines. On the roof are 5,300 solar modules covering a total area of 9,000 square metres. These make it possible to generate enough energy to cover the average annual consumption of 241 four-person households.”

The Via Mobile, a covered and glazed transport system with moving walkways and escalators measuring roughly three kilometres in length, conveniently links all the halls on the exhibition grounds. At the official opening, a delighted President and Chief Executive Officer Wolfgang Marzin said: “We have built a state-of-the-art, highly flexible hall with a transparent construction that allows for ideal visitor management and logistics. We would like to thank our shareholders and the Supervisory Board for their excellent, farsighted decision to build Hall 12 – thereby optimising the exhibition grounds as a whole. With Hall 12, we have created the best possible conditions for an even more flexible use of our exhibition grounds in future.”

The new Hall 12 also features Bavarian designer Ingo Maurer’s new installation, Flying to Peace, a vertical pendulum in the form of an ellipsoid. The design won a competition that sought a light art design for the North Foyer’s upper space. Through the glass façade, the pendulum can also be seen from outside moving all the way up and down. While swinging from side to side, the striking object is drawn upwards, giving observers a view of the different access levels.

“The pendulum is a fascinating interaction of movement and reflection which gives rise to wholly individual impressions and sensations,” said Maurer. “I am delighted that Messe Frankfurt has chosen the pendulum. As my company has been exhibiting at Messe Frankfurt for decades, I am well aware that, during busy days at the trade fair, there is a very real need for moments of relaxation and inspiring situations that help to provide new momentum. It would be wonderful if the people at the trade fair were to take on board the calm, regular momentum of the pendulum intuitively and find motivation in it.”

Since 1997, Messe Frankfurt has been pursuing an ambitious masterplan that aims to modernise the exhibition grounds, taking its quality to an even higher level. Uwe Behm, member of the Executive Board of Messe Frankfurt, said: “We are currently on the home stretch with this masterplan. Once it has been completed, we will have invested around €1 billion ($1.13 billion) in our exhibition grounds.” This will also include the new Hall 5, work on which will begin directly after the 2019 Frankfurt Book Fair, the technical overhaul of Hall 6 and the revitalisation of the Congress Centre.