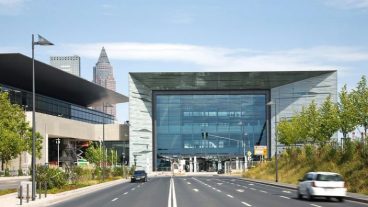 As of event year 2020, Messe Frankfurt says it will be changing over completely to green power, sourcing 100 percent of its electricity from renewable energy.

This includes the power supply for the stands, halls and exhibition grounds at the company’s Frankfurt base. For Messe Frankfurt, the move away from conventional energy sources is a further milestone in implementing its long-term strategic measures in the field of sustainability. The company’s cooperation partner is Frankfurt-based energy service provider Mainova AG.

Messe Frankfurt goes on to explain that its average energy needs are comparable with those of a town with around 40,000 inhabitants. Switching over to electricity with an optimised carbon footprint is described as “a natural next step” in the Group’s integral business practice.

As Uwe Behm, Member of the Executive Board of Messe Frankfurt, emphasises: “By switching over entirely to renewable energy sources, we eliminate some 19,000 tonnes of CO2 a year. Given that 80 trees compensate for approximately a tonne of CO2, you would need more than 1.52 million trees a year to offset this quantity of CO2.”

In this way, the company says it also accommodates the wishes of its customers.

Uwe Behm continues, “As a partner, we are acting on the desire among our exhibitors and guest organisers for an environmentally friendly approach to trade fair management.”

Awareness of the need for sustainable energy has further increased in recent years and a number of guest organisers already exclusively use electricity from renewable energy sources. For Messe Frankfurt, switching over completely to green power is a further means of actively helping to protect the climate and environment and of driving forward its energy targets with a view to achieving an integral energy performance. The company adds that it is also playing its part in the ambitious climate protection plans of its shareholders, the City of Frankfurt and the federal state of Hesse.

With Mainova AG, Messe Frankfurt says it has found an energy supplier side that knows the company and its needs extremely well. As Mainova management board member Norbert Breidenbach stresses: “Mainova and Messe Frankfurt have been partners for decades and our companies have strong roots in their home city. We also share a responsibility for protecting our climate. Messe Frankfurt also embraces this responsibility in its capacity as a member of the Business Efficiency Network founded by Mainova. As well as this, we are eager to help our partners in stepping up their efforts for sustainable energy supply by providing them with tailored solutions.”

Messe Frankfurt operates an active energy management system. As Uwe Behm points out: “Conserving energy is intricate work”. Accordingly, states the company, the targets set by Messe Frankfurt’s energy team will be implemented under the supervision and resolute drive of the company’s energy manager. Uwe Behm: “The sheer diversity of buildings on our exhibition grounds and the different ways in which they are built and used means that individual analyses are needed. In the case of new buildings and renovations, forward-looking, energy-optimised construction and efficient operation are vital, for example with compound cooling systems between the exhibition halls.” However, there are many small measures that are essential for efficient energy management, explains Messe Frankfurt – these include adapting air-conditioning for specific facilities, preparing energy consumption graphics to raise employee awareness, or having an effective building automation system.

Renewable energy has been a priority on the exhibition grounds for years, with three photovoltaic systems currently being operated there. Since late 2018, the third photovoltaic system – located on the roof of Hall 12 – has been generating energy from the sun’s rays. In future, an estimated 2 GWh of energy is to be harvested every year, which is roughly equivalent to the requirements of 500 households.

Since 2010, Messe Frankfurt has been a member of the United Nations Global Compact – the first German trade fair organiser to join its ranks. The worldwide CSR network is committed to sustainable corporate management and to the ten principles set out in the areas of human rights, labour standards, environmental protection and anti-corruption activities.