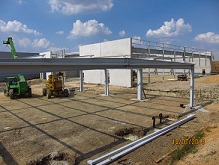 Based in France, LVL has been an established collector and supplier of empty cartridges to the remanufacturing industry for 15 years. It has now announced that it is in the process of expanding its warehouse and workshop facilities with the construction of a new site 67 percent larger than its current structure in La Chevroliére to cater for the “growth potential” of the business.

Construction began on the 2,306 square metre site in May 2013, with the company expecting to move into the premises in early 2014. It added that the building will be environmentally friendly, meeting French ICPE (Installation classée pour la protection de l’Environnement ) standards, and is just one kilometre away from its current location.

Philippe Guenin, CEO of LVL, said that the move will see the company “cross a new bridge in its history”; commenting: “Despite the difficult time encountered by our industry lately, LVL management is convinced that there is a growth potential in collecting and supplying quality empties to the remanufacturing industry.

“Although consumables usage is currently probably contracting and the collecting sector is under pressure for various reasons,  LVL strongly believes that printing will not disappear, that re-use will continue to progress, and that collecting and sorting in order to offer quality supplies to remanufacturers is a task that can be done better by a specialised company.”

Guenin added that LVL believes remanufacturers “will find it more and more practical to rely on serious suppliers” and that this in turn will create growth opportunities for those collectors that “concentrate on quality and reliability”.

The new facility will allow LVL to “double or more” LVL’s current capacity of sorting “slightly over three million cartridges per year”, Guenin said; accelerating the company’s development as it focuses on the strategy it implemented in 2004/2005 of concentrating on collection, remanufacturers, quality, reliability and partnership.